Doctor Who 50th Anniversary - Reflections on the Second Doctor 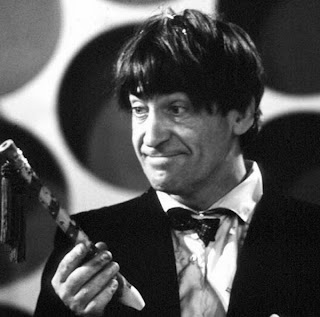 Of the eleven Doctors, I think I probably have the least to say about Patrick Troughton’s second Doctor. This isn’t out of a dislike of Troughton, his interpretation, or performance. I like his Doctor, and I enjoy watching the few episodes that still exist from his time. It could perhaps be because his era of the show is the most badly hit with missing episodes, and so there is less for me to reflect on and less to have impacted me. But that can’t be the entire reason. There are other Doctors with small episode counts (Paul McGann, Christopher Eccleston) and I suspect I’ll have quite a bit more to say about them when I get around to them in a few weeks’ time. For whatever reason, finally being exposed to his episodes just didn’t have as much an effect on me as other Doctors have. 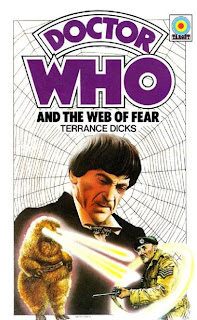 I wrote a fair amount last week about my early years searching for novelizations of the first two Doctors, as those books were the only way I had of experiencing them. Much like the first Doctor books, second Doctor books were difficult to find. I can’t remember now what exactly I read of the second Doctor. I do remember reading The Web of Fear—although, to be honest, I don’t remember the actual reading; I just remember finding the book in the library and seeing the very prominent picture of Patrick Troughton on the cover. I remember the excitement of seeing that book, and that may well have been the first second Doctor book I read.

It wasn’t until much later that I actually got to see Patrick Troughton in a television story. The first was "The Two Doctors" during Colin Baker's time. Then I got to see "The Five Doctors" when it came out on video (since TVOntario skipped it). But the first actual story I saw from his era came about in a very unusual situation and was completely unexpected. The series was finally starting to come out on VHS. A local video rental shop near where I lived in London, Ontario had a few Doctor Who videos and they had the ones that the local comic store I bought them at refused to stock (as I mentioned last week), so I decided to rent them (and I will confess, I copied them). One of the ones I rented was the Tom Baker story “The Robots of Death”. Well that’s what the box said, at any rate. So did the label on the actual tape—sort of. When I got home and took the tape out of the plastic case the rental shop placed it in, I noticed something odd about that label. With a ballpoint pen, someone had crossed out the word “Robot” and scribbled in “Seeds”. That was odd, I thought. Could this be a mislabelled copy of “The Seeds of Death” that had also been put in an incorrect box? Excited at the possibility, I slipped it into the VCR, pressed play, and lo and behold, it was “The Seeds of Death”.

But the story gets weirder. There was one additional fact that I wasn’t yet aware of. “The Seeds of Death” had not yet been released on video in North America. I discovered this a month or two later when I saw an ad in a magazine (I think it was Starlog) advertising the upcoming release of “The Seeds of Death”. That can’t be, I thought. I already had “The Seeds of Death”. Yet the date written in the ad was definitely a future date (I wasn’t just looking at an old magazine). And sure enough, on the date specified in the ad, “The Seeds of Death” (and the other stories advertised in the same ad) showed up on the shelves of that store that previously refused to carry more than just four stories. They had stickers on them marking them as new releases.

I still don’t know for sure what happened there. Production errors do occur. Things get mislabelled. Yet in this case, an unreleased product got mislabelled, put in the wrong box, and sent out with released stock. Presumably, the tapes for “The Seeds of Death” had been produced well in advance of their release (and I do know the story had already been released in the U.K. for quite some time—there was a large lag time for North American releases in those days). It was just a bizarre stroke of luck on my part, I guess.

Of course, it wasn’t long after that that YTV started showing Doctor Who every weekday starting right at the very beginning. So I soon got to see the first Patrick Troughton story--”The Dominators”! Okay, okay, that’s not actually his first story. It’s the first of his third and final season, but at the time, that was the only season in which any complete Troughton stories still existed. Even now, his first two seasons remain desolate. Since then, only “Tomb of the Cybermen” in its entirety has been recovered, and the second episode of “The Underwater Menace”.

I was in high school at the time I was finally getting to see Patrick Troughton, and Doctor Who was a pretty big part of my life at the time. It was on television six days a week (new episodes on Sundays, old episodes Monday to Friday), it was being released on video (and those videos were actually starting to be carried by a couple local stores), I was just starting what would become a long-running Doctor Who Roleplaying Game campaign, and more. With everything going on, perhaps it’s not that surprising that Patrick Troughton’s episodes had the least impact and influence on me. They just sort of got jumbled in the mix of everything else.

Even in later years, as the episodes from incomplete stories gradually showed up on VHS and DVD, and then later, the audios of the missing episodes on CD, I’ve still felt rather less impacted overall from the Troughton era than from others. Perhaps it’s the rather sporadic nature of it all, coming in bits and pieces. William Hartnell is the only other Doctor I’ve ever experienced in quite that way—a little bit here, a little bit there. There was a bit of that with Jon Pertwee and even the earliest Tom Baker years, but nowhere near to the same extent. 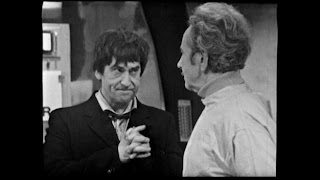 But I don’t want it to seem like he had no effect on me at all. When I heard about the recovery of episode two of “The Underwater Menace” (and the third episode of William Hartnell’s “Galaxy Four”) two years ago, I was certainly hugely excited, even though “The Underwater Menace” is far from an example of the best of Doctor Who. Watching the episode (after only having the third episode and the audios of the others) made me completely re-evaluate that story. There are incredible subtleties to Troughton’s performance. He was a very visual actor, and that just doesn’t come across on audio. Oh...erm...yeah, I know episode two hasn’t been released on DVD yet or any other medium, and I wasn’t at the Missing Believed Wiped event in 2011 where it was shown for the first time since the 60’s. So how can I have seen it? All I’ll say is, I was not the one who leaked it online. I may have just followed a link before it got removed. Maybe I have a knack for seeing Patrick Troughton stories in unexpected places.

At any rate, Patrick Troughton still holds an important place in Doctor Who. He ensured its survival after William Hartnell left. Changing the lead actor was a very risky move for the series. It was even riskier to change the character so drastically. Yet it worked. And that really comes down to how great a job Patrick Troughton did. There’s no doubting the show wouldn’t be the same if he hadn’t taken over. He just didn’t have a huge effect on me, personally. But the third Doctor certainly did, and in the oddest way possible.
Posted by Michael Ray Johnson at 18:39

Email ThisBlogThis!Share to TwitterShare to FacebookShare to Pinterest
Labels: Doctor Who, Doctor Who 50th, Doctor Who Reflections