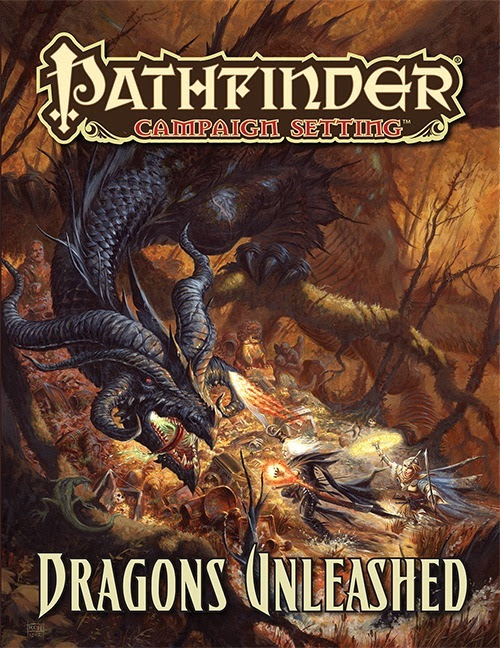 Dragons are an iconic part of fantasy. Massive, winged lizards that breathe fire (and sometimes other things like cold or poison gas), they inspire both awe and fear. Naturally, they are an iconic part of fantasy roleplaying as well. The original fantasy roleplaying game, Dungeons and Dragons, even has them in its name. As a game that developed out of D&D, Pathfinder, too, features dragons. Each Bestiary has included several types of dragons and dragon-like creatures, and other books have introduced a few other varieties as well.

Perhaps a little surprisingly, however, Pathfinder has done very little with dragons so far. Early on, there was the 3.5 supplement, Dragons Revisited, which looked at the ten core chromatic and metallic dragons and introduced the history of dragons in Golarion. Since then, dragons have occasionally shown up in adventures, but rarely as a principal antagonist. There hasn’t even been an adventure path yet that has a dragon as its central villain. Apart from the new kinds of dragons in the various Bestiaries, dragons have barely put in an appearance at all since the Pathfinder Roleplaying Game was released. In the last couple of months, however, there has been a little boost in dragon-related products, starting with Dragons Unleashed (which I am reviewing here), as well as the Dragonslayer’s Handbook and the adventure module The Dragon’s Demand (both of which I will be reviewing in the coming days and weeks). Where there was once very little, there is suddenly quite a bit.

Dragons Unleashed is very different from Dragons Revisited, and so people shouldn’t think that it is just a rehash of that earlier product. It doesn’t follow the format of the Revisited line of books, which look at the ecologies of various types of creatures. Instead, Dragons Unleashed presents fifteen specific dragons with their history, personality, complete stats, lair, and treasure hoard. The dragons are of various different kinds, not just the standard chromatic and metallic dragons (black, blue, green, red, white, brass, bronze, copper, gold, and silver), and cover a range of power levels. Of course, being the powerful creatures that dragons tend to be, the majority of dragons in this book have challenge ratings in the double digits. In fact, there is only one entry in the book (technically three dragons—the Brazen Clutch, all described together in one entry) with a CR below 10. The most powerful dragon in the book has a CR of 25 and many of the others have CRs in the high teens and low twenties.


Each dragon’s entry is four pages long and follows the same format. The first page is an overview of the dragon’s background and personality. The second page contains the dragon’s complete game stats. There is also a picture of the dragon, usually on the second page, but occasionally on the first. Sometimes, there is a brief section on using the dragon in campaigns on either the first or second page. This section only seems to be present if there’s room. The third page details the dragon’s lair, and a map of the lair appears on the top half of the fourth page. Finally, the bottom of the fourth page lists the dragon’s hoard. The overall presentation is ideal for gamemasters wanting to include a dragon as a major force in their campaigns but not having (or not wanting to take) the time to develop the specifics, particularly the stats. Creating a dragon’s statistics can be a time-consuming and fiddly endeavour, and this book will help to reduce that. GMs will still need to flesh out the dragon’s servants, but this is generally a much simpler task. The hardest work has already been done.

Each dragon in Dragons Unleashed is of a different kind and there are no repetitions (apart from the Brazen Clutch, which is a trio of wyrmling brass dragons). It’s nice to see a few of the less common dragons, including two imperial dragons from Tian Xia (a forest dragon and a sovereign dragon). Since the publication of the Dragon Empires Gazetteer and Dragon Empires Primer, there hasn’t been a lot of other material regarding Tian Xia (the Jade Regent adventure path and one module, The Ruby Phoenix Tournament are about it), so it’s good to see that region of the world getting a little additional attention. The other thirteen dragons are scattered about various locations in Avistan and northern Garun, with one white dragon in Iobaria.

Amongst the more interesting dragons in the book is the aforementioned Brazen Clutch. These dragons’ mother died before they hatched. Gnolls found the eggs, and after a few sales, the eggs ended up in a place in Katapesh called the Garden of Unearthly Delights. The three brass wyrmlings are now on display there as the centrepiece of a collection of exotic creatures. However, the wyrmlings are plotting their escape, which is naturally where player characters might come into the picture. Dragons often serve one of two roles in fantasy stories and adventures: an evil beast to slay, or an ancient and powerful voice of wisdom who provides advice or lost knowledge. Most of the dragons in Dragons Unleashed fit into one of these two categories in some way or another. However, the Brazen Clutch provides a different option by presenting young and vulnerable dragons that actually need defending. An adventure in which the PCs attempt to free the Brazen Clutch could be fun indeed.

Another of the more interesting dragons is Maghara, a copper dragon who is actually dead and now exists as a ghost. Maghara was killed by Aashaq the Annihilator, one of the other dragons in the book, making a nice interconnection between the dragons. Surprisingly, this sort of interconnection doesn’t happen much in Dragons Unleashed. Generally, if another dragon is mentioned in a particular dragon’s background, it is not a dragon that appears elsewhere in the book (not even in the extensive list of “Other Known Dragons” that appears in the book’s introduction). Personally, I would have liked to see a little more entwining of the dragons’ histories, but this is a minor concern. It’s nice to see it, at least, between Meghara and Aashaq. Meghara now haunts the lighthouse where he had his lair in life. He will sometimes impart advice or guidance to those in need, but his greatest wish is to learn the fate of his mate, Rokiere (which could make an excellent adventure seed for PCs).

The Brazen Clutch and Meghara are all good dragons, but they are not the only ones in the book. There is also Eranex, a silver dragon who is also part fey (she has the fey creature template) as her mother was a fey. The book would hardly be complete without a gold dragon, and the gold dragon here is a CR 23 great wrym named Garaudhilyx. There is also Sonthonax, a juvenile bronze dragon who is waging a crusade against Chelish slavers from this lair in Andoran (and also causing political tensions between the two countries).

There are also two neutral dragons who can be either friend or foe depending how PCs approach them and how GMs use them. Tuan Huy is a sovereign dragon who has been exiled from his home in Xa Hoi. His ultimate goal is to find a way to have his exile lifted. Rezlaraben is an adult brine dragon who controls a salt mine on Thoska Isle in the Ironbound Archipelago. At CR 11, she is one of the lower-powered dragons in the book.

Of course, GMs looking to include dragons in their campaigns are likely looking for villains, and there are loads of evil dragons in here to choose from. I’ve already mentioned Aashaq She is the most powerful dragon in the book—a great wyrm red who is also a 7th-level cleric of Dahak, the god of destruction and evil dragons. Aashaq is the type of foe who is custom-made as the ultimate villain for an entire campaign. She is not the type of creature PCs just randomly run into (and the same can be said for all the other dragons in the book). Instead, PCs must plan and work for a long time to even hope to face her in battle and live.

There are several other evil dragons that, while not quite as powerful as Aashaq, also make ideal final villains for a campaign. There is Deyrubrujan, a great wyrm blue in Thuvia, who believes that knowledge is a greater treasure than gold. She’s a more subtle villain than Aashaq, constantly making long-term plots and subtly manipulating those around her. Fahrauth is a great wyrm umbral dragon, while Moschabbatt (technically chaotic neutral, but fits most easily into the villain role) is an ancient magma dragon who possesses the fabled Axe of the Dwarvish Lords. Seryzilian is a great wyrm black dragon and Sjohvor a great wrym white. Toishihebi is a mature adult forest dragon in Minkai, who also maintains a notorious human identity, allowing GMs to introduce what initially appear to be two separate enemies who turn out to be the same enemy. Finally, there is Zedoran, a great wryrm green, who controls a network of raiders, kidnappers, and dealers in arcane drugs and poisons from his lair in the Fangwood Forest.

All in all, Dragons Unleashed provides gamemasters with a ready-made selection of dragons that they can include in their games. The good dragons can be kindly advisers or provide aid in times of need, while the evil dragons make for great final villains in campaigns that lead inexorably to their destruction. Gamemasters will get a lot out of this book.
Posted by Michael Ray Johnson at 21:59