Shattered Star - Into the Nightmare Rift 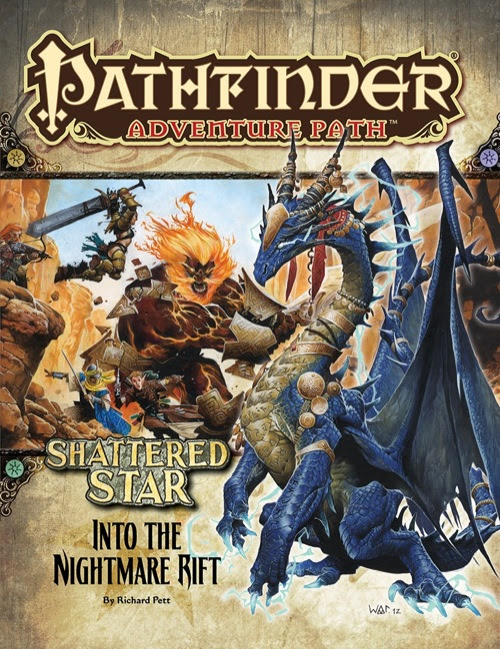 Mention the name, Cthulhu, in a room full of geeks, and the conversation will instantly turn to talk of “Outer Ones” and “Great Old Ones”, as well as various other nightmarish creatures, all taken from the works of H.P. Lovecraft. Lovecraft's writing has certainly influenced much fantasy (and even some science fiction) that has come after it, and roleplaying games have been no exception. The Pathfinder campaign setting of Golarion has many of these Lovecraftian elements hard-wired right into the setting, from the Outer Beings to the nightmare realm of Leng. Many Pathfinder adventures have featured beings out of Lovecraft stories, from the hounds of Tindalos to Leng spiders and more. The fifth adventure of Shattered Star, Into the Nightmare Rift by Richard Pett, is one such adventure, and it is more overt than most others as it takes the PCs into Leng itself.

I must confess that I haven’t actually read much Lovecraft (my geek cred just went way down, I suppose). However, I have learned about many of the concepts through other sources and I find them endlessly fascinating. So it’s perhaps a bit strange that Into the Nightmare Rift doesn’t quite do it for me. It’s a competent dungeon crawl, but therein lies some of the problem, I think. A dungeon crawl doesn’t feel the right style to do such a nightmarish reality justice. Going from room to room, killing monster after monster (which is what a great deal of this adventure is) doesn’t really allow for a building of dread and suspense, which I feel is really needed (especially for something with the word nightmare in the title).

That said, I should stress that I don’t consider this a bad adventure. My problems with it mostly come down to personal taste. In this respect, it’s similar to Shards of Sin, the first part of Shattered Star, in that it’s a competent, well-designed dungeon that just doesn’t grab my attention all that much. Nonetheless, it’s an adventure that probably many people are going to love because it will grab their attention.


The adventure opens with the PCs heading to Guiltspur, an ancient Thassilonian ruin buried under a lava flow, in search of the Shard of Wrath. The PCs can actually recover the shard quite early in the adventure, only to discover that the final shard, the Shard of Sloth, is not far away. So, similarly to Shards of Sin, the PCs again recover two shards in this adventure, allowing them to have the full set of seven shards for the next, and final, adventure.

Upon arriving at Guiltspur, the PCs discover that others have already come to Guiltspur. A group of giants (led by the blue dragon, Cadrilkasta, although the PCs might not learn this immediately) are in the process of excavating the site. It is from these giants that the PCs recover the Shard of Wrath. This opening part of the adventure, pitting the PCs against the giants is actually my favourite part of the adventure as it’s the most dynamic and the most open-ended. The party can even play two factions within the giants off against each other in order to make their own job a little simpler. Alternatively, they can just storm in and kill everything. There’s a lot of variation possible.

Once the party enters Guiltspur itself, the adventure becomes much less dynamic. The PCs essentially move from room to room and deal with the threats in each one. Actions in one room have little effect on other rooms, and many of the threats and monsters seem kind of random with little reason for being there and little linking theme between them. However, “The Core” section is a bit of an exception to this. Although a short section, it is more like a mini-setting rather than just another area of the dungeon. There are actual relationships between the creatures residing in this section. Also, the PCs encounter a group of drow here who have also come in search of the Shard of Sloth. Something that has been surprisingly absent from Shattered Star so far are rivals for the shards. While the other adventures so far have generally had the villain already in possession of a shard, none of them have featured other groups searching for the shards, so it’s nice to see that finally show up here.

The presence of the drow creates a moral dilemma for the PCs. These drow are definitely evil (their leader hopes to use the shard to complete her transformation into a vampire), but they are also honourable and true to their word. It is possible for the PCs to negotiate with them and even form an alliance with them. With help from the drow, the PCs’ task will certainly be much easier, but good-aligned PCs may baulk at the idea of allying with evil forces.

Eventually, the PCs make it through Guiltspur and find their way through a portal to Leng (Guiltspur was originally created by Runelord Karzoug as a place to maintain contact with his allies in Leng), where they track down the dragon Cadrilkasta, who has taken the Shard of Sloth. This final section of the adventure is set entirely within a small temple in Leng and doesn’t actually explore much of the nightmare land. Most of the temple is in disarray from Cadrilkasta ravaging her way through it, and as the locals don’t like the dragon either, the PCs have another opportunity to make allies, although these allies (Leng ghouls) can’t actually provide a lot of help against the dragon.

There are several mechanical things about Into the Nightmare Rift that I quite like. The adventure introduces “waking nightmares”, which work similarly to haunts, except that they’re not undead, but rather entirely mental effects (essentially being exactly what their name says they are). Also, most of Guiltspur is under the effects of a dimensional lock and a mage’s private sanctum, making dimensional travel and scrying impossible inside it. Normally, this is a dangerous tactic to take. Access to spells like teleport change the game drastically, and sometimes it can be very tempting to GMs to block those kinds of spells. However, this can be very unfair to the PCs. They’ve worked hard to gain these abilities, and should have the opportunity to use them. However, Into the Nightmare Rift takes this dangerous tactic and makes it work—and does it extremely well. First off, the dimensional lock and mage’s private sanctum only affect Guiltspur, not the excavations being made by the giants at the beginning and not the temple in Leng at the end. More than that though, the PCs actually have the opportunity during the adventure to end these effects by finding and disabling the abysium reactor creating them. So while the PCs are temporarily blocked from using some of their abilities, they are able to enact “revenge” of a sort and get those abilities back. So something that can start out as a little annoying to the players can become very satisfying in the end.

On the other side, I find Cadrilkasta a somewhat underwhelming villain. It’s a shame as, even though dragons have appeared in various Pathfinder Adventure Path volumes before, this is the first time a dragon has been the main villain of one of the adventures. Cadrilkasta actually has a very interesting background and a strong motivation for being there in the first place, but she has succumbed to the curse of the Shard of Sloth. Everything that she has done was accomplished before the adventure begins and she just basically slumbers for the entire adventure until the PCs reach her. She rouses from her slumber only to fight the PCs and get killed by them. The PCs do see the effects of her earlier passage throughout the adventure (although she does seem to have had surprisingly little impact on Guiltspur), so she avoids the syndrome of seeming like just another monster they meet at the end; however, I can’t help but feel that she would be a much more interesting villain if she were a little more active in the adventure, and not under the effects of the shard.

This same problem also affects one of the other villains in the adventure: the demi-lich Mesmalatu. She, too, has a rich history within Guiltspur, but one that the PCs will likely never learn even a hint of. Similarly to Cadrilkasta, she slumbers until the PCs either disturb her or shut down the abysium reactor. Then she attacks the PCs and ends up feeling like just another random monster—and liches and demi-liches should never seen like random monsters.

Like several of the other volumes in Shattered Star, I am much more interested in the support articles of this volume. The first is “Leng: the Terror Beyond Dreams” by Greg A. Vaughan, which provides an overview of Leng, including the creatures that live there and a short gazetteer of locations. It’s a short article and so can only give the broadest of introductions, but nonetheless provides just enough information to whet the appetite and start ideas flowing. I’d love to see a full supplement on Leng someday.

The second article is about the goddess Lissala. I’ve mentioned before that I’ve always liked Sean K. Reynolds’s articles about the gods of Golarion. However, now that the articles have moved beyond the core twenty deities, I’m enjoying them even more. This is probably due, in part, to there having always been large amounts of information available about the core twenty gods, but much less about these other gods. Lissala is particularly fascinating—an evil deity that you can easily justify non-evil people following and worshipping. I eagerly look forward to the next god to receive SKR’s treatment.

Overall, while I’m not particularly enamoured by Into the Nightmare Rift, I don’t dislike it either. It’s a competent dungeon crawl that achieves its purpose and has several nice touches to it. It doesn’t quite grab my attention the way I would expect something of its subject matter to normally do. Nonetheless, there are certainly many people who will find this a fun and exciting adventure to play.
Posted by Michael Ray Johnson at 17:15