Wizards Vs Aliens - The Last Day 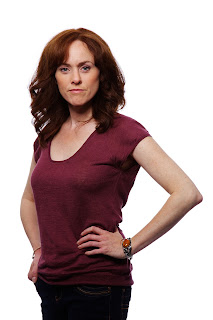 The first series of Wizards Vs Aliens has had its ups and downs, but on the whole, has trended more towards the ups. In the final two episodes, “The Last Day” by Phil Ford, it reaches a new height by providing the most emotional story yet and resolving a couple of mysteries that have carried through the whole series so far. The story manages to combine a little bit of spookiness, great atmosphere, action, excitement, and good character development all into one compelling tale. Yes, it does overdo it at times with the sentimentality, but not egregiously so, and as that sentimentality does play into the triumphant and uplifting ending, I’m willing to forgive it for going just a little over the top. Overall, it’s a delightful and fitting finale for the first series and paves the way for the second series to come.


“The Last Day” has an incredibly effective opening, from the flashback of Tom’s mother’s death to Tom seeing his mother outside the theatre. Even after this, right up until Tom actually speaks to his mother, the story retains a distinctive atmosphere of spookiness—one that is even a little doom-laden and oppressive in a way the show has never attempted before. It works immensely well at pulling the viewers into Tom’s world and making them feel the fear and loss that he feels. I have no doubt these opening fifteen minutes or so will keep the children watching on the edge of their seat, or perhaps even, to use a Doctor Who euphemism, hiding behind the sofa. And impressively, it does all this without a single appearance of the Nekross—perhaps an indirect acknowledgement that the Nekross are too over-the-top to be truly frightening.

What’s nice about the opening, too, is that it shows us a little of the characters’ lives beyond the Nekross. While there have been brief moments of Tom attempting to flirt with Katie, only “Rebel Magic” has had any extensive sequences without Nekross (and even that story established the Nekross’s presence in the pre-titles). The characters are still reacting to out-of-the-ordinary events, but for once, they’re reacting to something different than the aliens (or so they believe) and that allows us to see a slightly different side to them. Even Benny gets a little humanized. It’s a subtle moment, but Benny is on the verge of tears when Tom tells him the story of what happened to his mother (it’s extremely well played by Percelle Ascott). Little moments like this go a long way to defining characters and making them feel real—and there are quite a few such moments in “The Last Day”, almost all through how various characters react to the presence of Tom’s mom, Helen.

And, of course, while Helen is the focal point of this story, she is not really what the story is about. Instead, it is about her family, particularly Tom, moving on without her (whilst simultaneously defeating an alien invasion). I am really very impressed with Helen as a character, both in Jennifer Hennessy’s performance and in how she is written. Wizards Vs Aliens has had the unfortunate habit of introducing us to new characters who are, at first, two-dimensional and stereotyped. Even the principal characters were introduced this way (and some, like the Nekross King, have remained that way). However, Helen is different. Her introduction is not forceful. Perhaps her initial amnesia encourages this somewhat, but she is right away a very subtle character. There isn’t a single stereotype you can point to and say, “That’s Helen.” Instead, she feels like one of the most real characters we’ve seen on the show, and that reality helps to define the principal characters in ways the rest of the series hasn’t managed. This is not really all that surprising though, as many of the best character moments in previous stories have come when Helen has been mentioned. It makes sense that the biggest insight into the characters would come when Helen actually arrives. Benny is a little bit less a walking computer. Ursula is more clear-headed and has almost no moments of befuddledness. Even Michael, perhaps one of the dullest characters on the show, becomes something a little more, someone the audience can relate to. And the performances by the cast are really quite excellent.

Of course, Helen’s effect on Tom is the most important part of the story. Alas, I think this is the area where the story succeeds least. I’m just not quite as convinced by Tom in this episode as I am by everyone else (even Katie, small role though she has, seems to come alive more in this story than Tom). Scott Haran’s performance is not quite as inspiring as the rest of the cast. This is not to say it’s a bad performance, but it doesn’t quite reach the heights of the others. It’s actually kind of hard to pinpoint exactly what I feel is missing, but I don’t feel that we really learn much more about Tom that we didn’t already know. The return of his mother should have a more profound effect on him, which is clearly what the story intends, but just doesn’t quite achieve.

Although “The Last Day” focuses heavily on Tom’s family, as the series one finale, it certainly can’t ignore the Nekross. Not surprisingly, the Nekross turn out to be behind Helen’s reappearance—and more than that. Throughout the series, there have been occasional references to the “Master Plan”. I’ve wondered a few times just what the Nekross plan to do once the Earth is drained of magic. With no magic left anywhere else in the universe, would they starve? Can they survive on anything else? Surely they realize the implications of no more magic if they can’t survive without it? I didn’t actually guess the answer, but it makes perfect sense: cloning wizards and draining the clones. It also neatly ties in Helen’s death six years earlier with the metaplot of the series. In addition, it provides a tidy explanation of why the Nekross haven’t been more aggressive and proactive about gathering wizards, and have focused so much energy on going after Tom. I suggested in my review of “Dawn of the Nekross” that one way the show could avoid becoming stale would be to give the Nekross some sort of master plan, one that would make everything else a diversion, and it seems I wasn’t very far off in that idea. The Nekross have been gathering only a small number of wizards to keep themselves fed while working on their true objective.

I do have to wonder, however, why the Nekross chose to set up the relay point for their master plan so close to Tom’s home. Of course, since they’ve been working on it for a while, it’s possible that Tom hadn’t yet established himself as a threat when they first set up the cloning station there. However, once he established his threat, I don’t see why they couldn’t have moved the relay point to another location, even if it slowed them down a little. That way, even if he managed to take out the cloning location near him, he wouldn’t be able to shut down all the others so easily. Of course, the biggest reason for this is that it’s necessary to tell a good story. However, it would have been nice if there were at least some in-world explanation. Still, this is a minor point, and it doesn’t in any way spoil the story as a whole.

In my review of “Dawn of the Nekross”, I mentioned that one of the things that drew me to this series was the obvious influence of The Sarah Jane Adventures. The same team is responsible for both shows, and there’s a lot of the spirit of Sarah Jane in Wizards Vs Aliens. While the show has certainly established its own identity (and, alas, I don’t think it’s as good as Sarah Jane yet), those influences are very apparent in “The Last Day”. With the introduction of Helen, the show almost becomes about the adult woman with her child sidekicks who go out to save the world from alien invasion. Helen even looks very reminiscent of Sarah Jane, right down to the leather jacket she dons for battle. Like Sarah Jane, she’s also determined to keep her family out of danger and to take on everything by herself. When the pale shadow of the real, uncloned Helen arrives at the end to provide Tom with one last boost of energy, it feels almost like a passing of the torch from one show to the next, like Sarah Jane investing the youngsters she groomed with the right to go out on their own. The episode even ends with another Sarah Jane-like speech (unfortunately, almost word-for-word the same one Tom gives at the end of “Dawn of the Nekross”). The sentimentality in the scene is turned up super high, of course, so perhaps that is clouding my vision, but I can’t help feel the allusions are quite deliberate.

As a whole, I’ve really enjoyed this first series of Wizards Vs Aliens. It hasn’t been perfect—much of the characterization, in particular, has been very two-dimensional, which surprises me as I know the people making the show are capable of much better—but it has been fun and entertaining, and full of inventive ideas. There has been a general trend towards improvement, too, as the series has gone along. The characters have become less two-dimensional, some of them (like Lexi) becoming complex and compelling characters. In “The Last Day”, the show has definitely reached a new height, one that promises great things for the future. A second series has already been confirmed and I will certainly be watching it when it arrives.
Posted by Michael Ray Johnson at 14:36