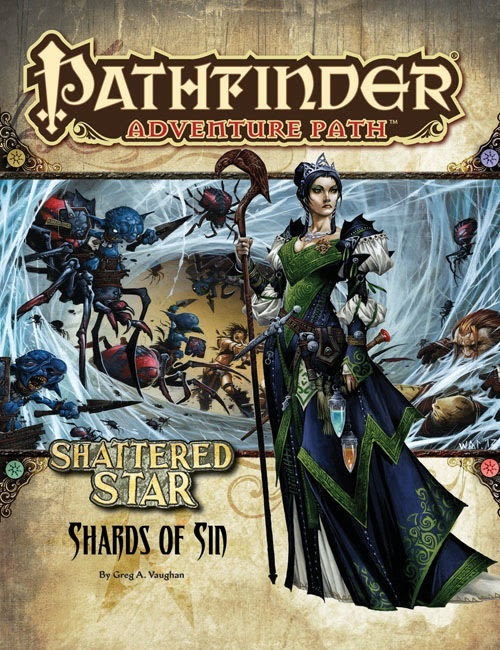 The current Shattered Star adventure path is a first for the Pathfinder Adventure Path series. It is the first “sequel” adventure path, the first to assume that any previous adventure paths have occurred. Paizo has been consistent in their stance not to have the game world constantly changed by the events of adventures, APs, or novels. This keeps the campaign setting accessible to new players. People can pick up the Inner Sea World Guide, read through it, and be able to use any published adventure with it, without discovering that everything’s changed and that they now need to pick up twenty other books to keep up with it. As such, all adventure paths have been stand-alones, not contradicting, but not assuming that the events of any other adventures paths have happened. The closest there has been to a sequel is Jade Regent, which reuses some characters (Ameiko and Shelelu) from Rise of the Runelords, but there is nothing about the AP that requires the earlier one to have happened. Maybe it did, or maybe it didn’t. It doesn’t affect Jade Regent in anyway. However, as part of the celebrations for the 10th anniversary of Paizo Publishing and the 5th anniversary of the Pathfinder brand, Shattered Star looks back to the past and becomes the first AP to break the trend and assume that a previous AP has occurred—and not just one previous AP, but three: Rise of the Runelords, Curse of the Crimson Throne, and Second Darkness, the first three adventure paths published in the Pathfinder Adventure Path series.

That said, Shattered Star is not intended to be run with the same characters as the three paths it follows on from (especially as none of those were meant to be played with the same characters either). Like all adventure paths, it begins with new, 1st-level heroes. As such, there’s no requirement to play through the earlier APs before playing through Shattered Star (although the players may come across some spoilers for those earlier APs), so even someone with no knowledge of the earlier adventures could easily pick up Shattered Star and start running it. Indeed, the links to those early APs in the first adventure, Shards of Sin, are pretty small. Only Rise of the Runelords is referenced directly, and then only to form the basis for why the PCs are setting off on their quest: to ensure that the world has protection should events similar to Rise of the Runelords ever happen again.


I have to say that I’m not a big fan of dungeon crawls; however, I do acknowledge that a well-made dungeon can be a lot of fun, and I’ve certainly played through some dungeon crawls that have been very memorable and exciting. The problem with dungeon crawls is that if they’re not done well, they can become a terrible slog that just seems to go on and on. The Impossible Eye, the fifth instalment of Legacy of Fire felt this way to both me and my players when we played through that adventure path, and we all breathed a collective sigh of relief when that instalment was over. Shards of Sin presents a good, competent dungeon. There’s potential for roleplay and dynamic interaction. There’s a good cast of characters with motivations that help to make sure the adventure doesn’t just become one of going from room to room, killing monsters, taking their stuff, and moving on to the next room. Although the dungeon feels a bit disjointed at times, the problem with Shards of Sin isn’t with its dungeon; it’s that there’s not a whole lot to really grab your attention and hold on to it. Of course, this moves into the territory of personal opinion, so no doubt there will be those who disagree, but I find little in the adventure that really stands out and makes it unique. It’s a bog-standard adventure that is little different from the hundreds of other bog-standard adventures out there. As I said, it’s competently written and I have no doubt it would be fun to play, but it’s the sort of adventure that’s likely to sit on the shelf for a long time while all the other more interesting things get run first.

Shards of Sin begins with a pretty standard adventure opening: a rich aristocrat hires the PCs to do a job for her. There’s a very slight twist in that the PCs are assumed to be new members of the Pathfinder Society and the aristocrat in question, Sheila Heidmarch is their superior; however, the basic format is intact. (Indeed, the Pathfinder Society angle can be easily ignored by GMs and players who are not interested in it, and Sheila Heidmarch can become just a random Magnimarian aristocrat who hires them. Being members of the Pathfinder Society has next to no impact on the adventure itself.) I think it’s quite like that writer Greg A. Vaughan started the adventure in this way as a deliberate nod to the past, as there was a time when every Dungeons and Dragons adventure opened this way. The exact person doing the hiring might have varied, but there was always somebody hiring the PCs. While this kind of opening worked back in the day, I tend to prefer something a little more immersive these days, especially for the first adventure of an entirely new campaign. Other than the lure of money and fame, or perhaps a sense of duty, there’s nothing to motivate the PCs with this type of opening—and perhaps more importantly, nothing to grab the attention of the players. This is made even more so in Shards of Sin by the fact that Heidmarch proceeds to ignore the PCs for a while when they first arrive so that she can talk in private with another NPC who is there. While this does actually develop Heidmarch’s character quite well, it does nothing to grab and hold onto the players’ attentions. It merely delays any sort of hook into the adventure. And the puzzle box she gives them to solve only delays things even further. I much prefer campaigns to start with something that immediately wraps the PCs up into the game world. The opening of Burnt Offerings, the first instalment of Rise of the Runelords is an example of a great starting hook. It begins with the PCs taking part in a local custom (the Swallowtail Festival), followed quickly by an attack that wraps the PCs up in events to come. Shards of Sin opens with the PCs sitting in a generic waiting room with a puzzle box that releases some pugwampi gremlins at them if they get it open. It doesn’t in any way introduce the PCs to the setting, and neither the puzzle box nor the pugwampis have anything to do with the events of the adventure to come.

Once the PCs have actually received their mission, the adventure does start to get a little more involving and interesting. The PCs get to engage in a little bit of detective work, which allows the players to immerse themselves in Magnimar and start to feel part of the setting before heading off to the dungeon. While the mission itself is not the most interesting (it’s just a retrieve-an-item scenario), the events they encounter while trying to complete it are more engaging. I do like that the Tower Girls, the antagonists for the early parts of the adventure, are more than just an evil group trying to kill the PCs. Indeed, while their wererat leaders are definitely evil, most of the Tower Girls, while thieves, are not actually evil, and this creates a bit of a moral quandary that can allow for some good roleplaying opportunities. Alas, I fear most parties will just slaughter the Tower Girls without bothering to talk to them first.

I also like the use of mites as the major force in the next part of the dungeon after the Tower Girls. Mites are very rarely used monsters (perhaps because they’re amongst the weakest monsters in the Bestiary), and it’s always nice to get a bit of variety in monsters.

The competing devils following the mites are also kid of fun, but by the time the PCs reach the end of the dungeon, the adventure does start to feel somewhat disjointed. The mites have nothing to do with Tower Girls, the devils have nothing to do with the mites, and the derro have nothing to do with any of the previous antagonists. This does hearken back to the early days of D&D when every “level” of the dungeon was like its own separate world, with its own ecosystem, and ruled over by a new kind of monster, so I do understand why this style is copied here as another nod to the past. But I grew tired of this style a long time ago, and it still feels somewhat tiring now.

Like all Pathfinder Adventure Path volumes, Shards of Sin contains several support articles to go along with the adventure. The first, “The Shattered Star”, provides background information and stats for the item the adventure path is named after. I found this section the highlight of the volume, less so for the stats on the Shattered Star than for the history contained in the first two pages. I always like new information on the game world, and the history presented here is particularly illuminating. This volume’s Bestiary is also particularly interesting in that it contains a number of real-world cryptids (legendary creatures like Bigfoot or the Loch Ness Monster), including skvaders, wolpentingers, and snallygasters. The volume also contains a two-page summary of the entire adventure path. Like all volumes, there is also an instalment of the “Pathfinder Journal”. However, as I did with my reviews of Jade Regent, I will wait until all six parts are published to review it as one complete story.

Overall, Shards of Sin is not a bad adventure. In fact, it’s quite competent and contains several sections that I think would be fun to play. The dungeon is dynamic and contains interesting characters that actually interact with each other (within their respective “levels” at any rate). However, as a whole, the adventure doesn’t particularly engage me and, at times, feels somewhat disjointed. It should be said though, that a number of my “problems” with the adventure come down to personal taste and there is little objectively wrong with them. The adventure is clearly trying to evoke the feel of old-style adventures from the early days of D&D, and in this respect, it succeeds quite well. People who enjoy that style of adventure will probably get a great deal of enjoyment out of this one.
Posted by Michael Ray Johnson at 14:13