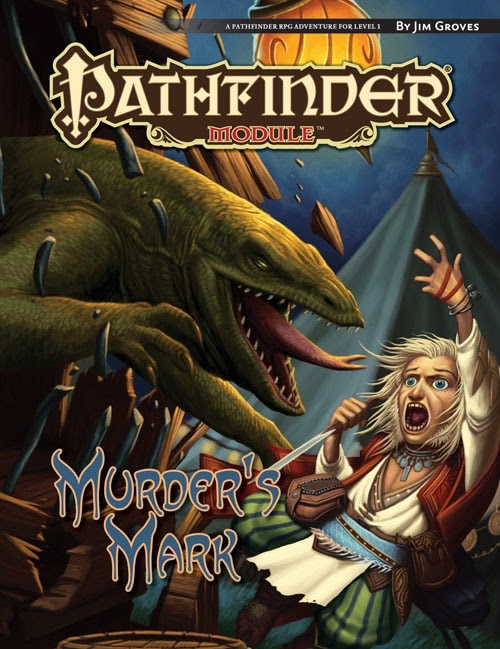 I’ve always liked adventures that do something a little different, ones that provide adventuring parties with something that transcends or even ignores the typical tropes associated with Dungeons and Dragons-style games. A well-made dungeon can be fun sometimes, but adventures that actually involve characters with the setting and don’t even go near a dungeon (or ruined castle or ancient caves or whatever large, indoor establishment you can come up with) are often better (assuming they’re well-designed, too). Murder’s Mark by Jim Groves is such an adventure. It’s a charming, low-level adventure centred around a Varisian circus and a murder mystery. It contains a wide assortment of well-detailed and interesting NPCs, each with their own motivations and goals, and lots of opportunity for roleplaying and setting immersion. There are surprisingly few fights in this adventure; however, there are numerous other things to keep the party’s attention and to keep them searching for the answers to the mystery. Alas, the adventure does has one significant problem that could completely ruin things if you have any rules lawyers in your group. However, if you have a group that is simply willing to go with the flow and not worry about a niggling rules detail, Murder’s Mark could make a great adventure to start a new campaign with.


I can be quite picky about the hook for first-level adventures. For something that is likely the very start of a campaign with brand-new characters, there needs to be something that immerses the players in the game world and grabs their attention outright. I’m happy to say that Murder’s Mark meets these criteria quite admirably. It opens with the circus having come to town and the PCs (for whatever reasons the players and GM decide upon) visiting it. The PCs have an opportunity right from the start to interact with the setting that will be a major focus of their first adventure. They can see or even meet a few of the NPCs for the first time, and during it all help out with a minor altercation. It’s this minor altercation that brings them to the attention of Almara Delisen, the owner of the circus. When the first townsperson is murdered and the circus’s sphinx is implicated, Almara then comes to the PCs for aid. While this may not seem the most exciting opening, what I like about it is that the players will actually feel like their characters are a part of the setting once the main action starts, and also, there is a reason why Almara comes to them for aid. They’ve actually demonstrated that they can be both competent and trustworthy.

The adventure continues from this point in a well-thought-out manner. It flows naturally, and does a good job accounting for the different actions the PCs might take. One potential problem of adventures like this is they can succumb to railroading, forcing the PCs along a preset path of events that they have little control over. Indeed, it’s pretty much impossible to do an adventure like this without a little bit of railroading. Murder’s Mark nicely manages to avoid egregious examples of this and provides PCs with a decent array of options on how to proceed. As such, certain key moments could happen at any of numerous different points in the adventure, and this helps keep a sense of control in the player’s hands. For example, the truth about the sphinx, Jherizana, could come out at just about any time, either early in the adventure or quite late. The NPCs do their best to convince the PCs not to reveal this truth to the authorities, but there is nothing actually preventing them from doing this if they so choose. The PCs’ actions in this case can have a huge effect on the outcome of the adventure. (My only complaint here is that the adventure contains very scant details on the NPCs’ reactions if the PCs make Jherizana’s illusory status public.)

One of the things that I like most about the adventure’s progress is that the villains actually change their plans in response to the PCs’ actions. This makes the setting feel alive and the villains all-the-more believable and realistic. I love that Borvius Monchello ultimately attempts to implicate the PCs instead of Jherizana by actually trying to impersonate one of them. Too many adventures have the final villains sitting in a room at the end of the dungeon, apparently just waiting for the PCs to get there and not taking much independent action of their own. Murder’s Mark instead makes Borvius and his wife active participants. The adventure also allows for several possible fates for Borvius and Robella. Borvius might be killed by the PCs or handed over to the authorities before the end of the adventure, or he might get away and the PCs will have to face him and his wife together. This allows for much variety in play experiences.

Unfortunately, there is a potential problem with Murder’s Mark, one that could harm play with some groups. One of the key revelations of the adventure is the fact that Jherizana doesn’t really exist. She’s just an illusion created by Ika, a bard who works with the circus. Adjudicating illusions can often be a contentious thing. While the Core Rulebook has an extensive section on illusions and what counts as “interaction”, there still remains disagreement between a lot of players on exactly when characters get a saving throw to disbelieve. I’ve seen groups argue extensively over such things. I’ve seen gamemasters who handle illusions fairly and reasonably, and I’ve seen gamemasters make it pretty much impossible for PCs to ever effectively use illusions. Unfortunately, the two illusions that create Jherizana in Murder’s Mark don’t really fall under this area of ambiguity, and as such could significantly annoy players who like adherence to the rules as written.

The sphinx’s guards serve only to prevent anyone from testing the illusion by interacting with it directly. With the cooperation of the entire circus, this technique makes it very difficult to pierce the illusion. Saving throws should not be permitted without direct interaction with the illusion.


Similar text is used on page 15, when discussing Jherizana’s actions if the PCs decide to question her. She discourages the PCs from coming too close so that they won’t interact with the illusion. The problem is, this only works if Jherizana never speaks. According to the ventriloquism spell description, “anyone who hears the sound and rolls a successful save recognizes it as illusory (but still hears it).” By a strict interpretation of this line, anyone who hears the sphinx is interacting with the spell (after all, how else could you interact with a purely auditory illusion?). Taking this to its extreme conclusion, this means that everyone who even comes to the circus and hears Jherizana will have a chance to recognize that her speech isn’t real. Of course, the majority of circus-goers will be 1st-level commoners, so most of them will fail their saves. However, a few will pass, and some of those will tell others what they’ve noticed. In the end, the circus’s entire attraction fails to work, undermining what is supposed to be the main source of the circus’s success.

I’ve played with many players who simply wouldn’t be bothered by this. They’d either not even notice that they should have had a saving throw, or they’d just shrug and say, “Whatever. It’s more fun this way.” If you have such a group, this becomes a non-issue. Just go with it as written, and you don’t have to worry about anything. Alas, I’ve also played with many players who would be very annoyed to learn they’d been denied a saving throw they should have had. With such groups, this could become enough of an issue to ruin the play experience. There are a couple options for solving this, however.

First, you can just give the PCs a saving throw the very first time Jherizana speaks. If any of them pass, just run with it. Allow them to learn early that Jherizana is just an illusion. If they agree with Almara and not publicly reveal the information, the adventure will change very little. Of course, early on, they have less reason to agree with Almara (as they’ve had less time to get to know and trust her), so they might be more inclined to reveal the information publicly. Even so, this doesn’t mean the adventure’s a wash. The villains just change their plans more quickly and the PCs might discover they’ve also made enemies of the circus! There is a problem with this solution though, as some players might question why no one else has ever noticed that Jherizana is an illusion.

The other option is to just never have Jherizana speak. Ika creates her with minor illusion only, so she never does more than sniff haughtily or something similar whenever someone speaks to her. The circus could claim that she just refuses to speak with other races and their magical control over her is not enough to force her to speak. When the PCs inevitably demand to question the sphinx, the circus could be resistant at first, and then eventually reveal the truth to the PCs. The adventure actually changes very little with this approach.

The illusion issue aside, I think Murder’s Mark is a very good low-level adventure. It provides an interesting mystery with lots of options for how the PCs can proceed. Best of all, it creates an immersive world experience with interesting, dynamic NPCs, and lots of opportunity for roleplay. The illusion issue might be problematic with some groups, but GMs who know their players well should be able to plan for this and make adjustments to the adventure accordingly. Overall, the adventure could make for a great one-off adventure or a the start of a whole new campaign.
Posted by Michael Ray Johnson at 14:38