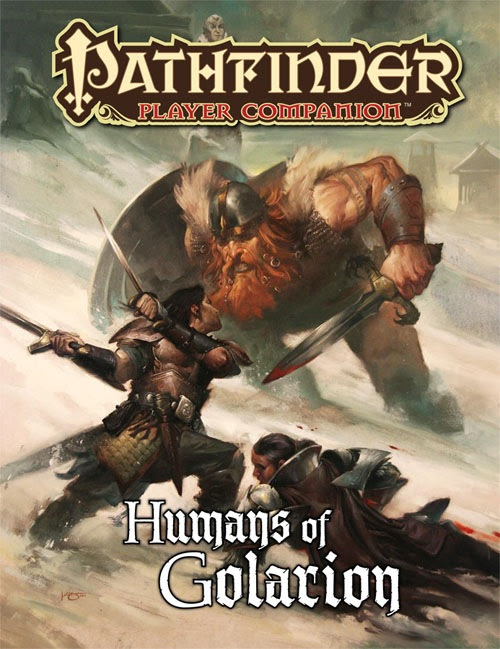 The Pathfinder Player Companion line of products contains several books centred on the specific races of Golarion (such as Elves of Golarion, Gnomes of Golarion, and most recently, Goblins of Golarion). Humans of Golarion rounds out the core races within this sub-series of books. Much like the other race books, it is focused on providing options for players of the given race. Unlike those other books, though, it needs to cover a much broader topic, as humans are the most prolific and varied race on Golarion.
It is because of this that Humans of Golarion has received a lot of negative criticism. Many people feel that the book doesn’t offer much new for people who already own the Inner Sea World Guide or its predecessor, the Pathfinder Campaign Setting. To a certain extent this is true. Each human racial group, for example, gets a one-page write-up like the equivalent one-page write-up in the Inner Sea World Guide. They are not word-for-word copies. Instead, the Humans of Golarion write-ups present a more player-orientated description of the groups. However, there is no denying that the information contained within them is very similar to that in the Inner Sea World Guide, and people who have read that book (or the Campaign Setting) are not going to discover much that is new in them. As such, Humans of Golarion seems a much less exciting or interesting read than the other race books, as it doesn’t provide new insights into humans in the way that a book like Gnomes of Golarion provides new insights on gnomes.
I think one thing that needs remembering, though, is that the target audience of Humans of Golarion isn’t really GMs who are thoroughly familiar with the Inner Sea World Guide or its predecessor. For players who are new to the Golarion setting, it provides a good overview of human cultures, and for all players (new and old alike), it provides game options (such as traits and spells) for human characters. If you want more in-depth information about the various human societies, there are other books available in the Player Companion line that do just that: any of the books on specific countries, such as Andoran, Spirit of Liberty or Cheliax, Empire of Devils. After all, these are primarily human countries, and they provide new insights into those cultures. The other races don’t have the variation in culture that humans do, and so their individual books can focus on culture more so than Humans of Golarion, and when there is variation, the other race books tend to focus on just one. (Elves of Golarion, for example, focuses primarily on the elves of Kyonin and, in many ways, could be seen as a country book on Kyonin, giving only a token mention of other elvish groups, such as the elves of Mordant Spire.) Humans of Golarion can provide a starting point for character options, and then other books can fill in the specific details.
One thing Humans of Golarion does offer that you won’t find in any other book to date is full information on the faith of Aroden. As a dead god, Aroden doesn’t have much of a following left, but he was an extremely important god in the history of the world, and his legacy still has a major impact on current life. There may not be any true clerics of Aroden left, but there are still a few worshippers who cling to the belief that one day Aroden might return. The two-page write-up on Aroden provides players and GMs with a valuable resource on what kind of faith those hold-outs follow. Also, if a GM wishes to set a game in Golarion’s past before the death of Aroden, players now have all the information needed to play a cleric of Aroden in such a campaign.
Humans of Golarion also contains a selection of traits for new characters, as well as a breaking-down of different weapons by culture. Both of these sections could be of great use to human characters.
One section of the book I did find weak is the section on human racial spells. Although each spell is identified with a particular group of humans (ablative sphere is a Garundi spell, for example), there is little about the spells that really makes them stand out from spells you would find in a generic source like Ultimate Magic. The one exception is cultural adaptation, a Taldan spell that is designed to help pacify their “uncivilized” conquests. The spell has a truly Taldan feel to it, unlike a spell like burning arc (a Keleshite spell), which, apart from being a fire spell, really doesn’t do anything that identifies it as particularly Keleshite. While it makes sense that Keleshites (as followers of Sarenrae) would develop fire spells, there is nothing about this spell which sets it apart from fire spells developed in other lands. Given that there are only two pages in which to provide unique human spells, I would have hoped that they would be truly unique and not just yet another way to burn your enemies.
Overall, while Humans of Golarion is not the most “exciting” book in the Pathfinder Player Companion line, it does what it sets out to do: provide an overview of human cultures and offer options for human characters. Indeed, despite its more mundane qualities, it is a book that is likely to see more in-game use than some of the other race books, such as Goblins of Golarion. As such, it’s a book worth having. Just don’t expect to be wowed.
Posted by Michael Ray Johnson at 00:11