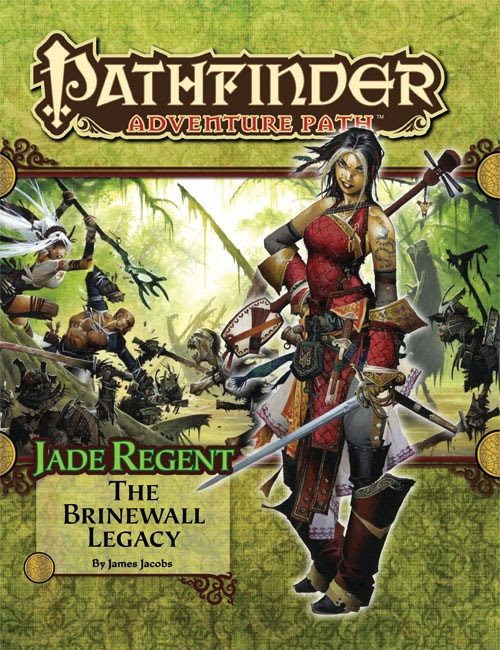 Pathfinder Adventure Path #49: The Brinewall Legacy is the opening instalment of the Jade Regent Adventure Path. Written by James Jacobs, Paizo’s creative director, it presents the first part of a world-spanning campaign that will take PCs from the small town of Sandpoint in Varisia (part of the world of Golarion) to the eastern continent of Tian Xia and the country of Minkai. Fans of the old AD&D Oriental Adventures book are likely to find a lot to love in this series. Minor spoilers follow.
The plot of The Brinewall Legacy revolves around discovering the birthright of a prominent Sandpoint personality, Ameiko Kaijitsu. People familiar with the Pathfinder Adventure Paths will recognize Ameiko from the first AP, Rise of the Runelords. She was a prominent, though minor, character in that Adventure Path, and is now a major focus for Jade Regent. (Warning: Some of her history has been retconned slightly to keep her still very young in this adventure. Game Masters who wish to set this after Rise of the Runelords may want to review this and make appropriate adjustments.)
I’ve always been a fan of James Jacobs’s adventures, and he doesn’t fail to deliver in this one. The adventure opens with the PCs heading into Brinestump Marsh to investigate goblin activity. While there, they discover a letter written by Ameiko’s grandfather. This letter sends them, along with Ameiko and three other prominent NPCs, north to the abandoned town of Brinewall.
This adventure contains some things in common with Jacobs’s earlier adventure, Souls for Smuggler’s Shiv (the first volume of the Serpent’s Skull AP), in that it contains a cast of compelling NPCs who spend a large part of the adventure in the company of the PCs. Going beyond even what was in the earlier adventure, the Jade Regent Player’s Guide (something anyone running the adventure will want to have and available for free from paizo.com) provides rules mechanics for developing relationships with these NPCs that could possibly even bloom into romances. Paizo’s adventures often present NPCs as possible love interests for the PCs, but this is the first time they have attempted to codify rules for it. And they have done a pretty good job. Players keep track of relationship scores with each NPC, and these scores determine the kind of relationship they have. The rules for acquiring relationship points are very straight-forward and don’t add a lot of complexity to the game, which is good as Pathfinder is a complex game already.
I suspect groups that are not hugely comfortable with roleplaying relationships but still want such relationships in their games will find these rules to be very useful (although the Sense Motive DCs for determining whether NPCs are interested in your character are very high and some people might find that frustrating). However, groups that routinely roleplay complex relationships and love affairs may find the relationship rules unnecessary and even confining. In such cases, though, the rules are easily ignored, allowing anyone to play the way they have always played.
In addition to relationship rules, there is also a very straight-forward system for handling caravans in the game. The PCs become part of a caravan part way through The Brinewall Legacy and will travel across the world with it. These rules give them the opportunity to expand and develop their caravan in the way they want. The rules provide an extremely useful add-on to the game.
For those less interested in relationships and caravans, the adventure still provides plenty of opportunity to roll the dice and deliver the smackdown on evil goblins, undead, and other creatures. In particular, the adventure makes great use of a rarely used monster, the dire corby. These creatures have existed in some form in Dungeons and Dragons for many, many years, but have generally been amongst the laughingstock of D&D monsters. Dire corbies recently got a revised treatment in Misfit Monsters Redeemed, part of the Pathfinder Campaign Setting product line, and now get to shine as the principal foes of this adventure.
The only weak spot in the adventure is the opening. Most APs start with a very strong hook that gets the PCs involved immediately and provides them with a motivation to stick together right from the start. Serpent’s Skull opens with the PCs shipwrecked on a tropical island along with a group of NPCs, and they must work together to find a way off. Rise of the Runelords opens with a goblin attack on Sandpoint. However, this adventure provides only the mention of a “goblin bounty” to provide the PCs with a motive to head into the swamp to hunt goblins, something not every party is going to latch onto. Game Masters may find they want to add an additional hook to help motivate the PCs into heading into Brinestump Marsh.
The Brinewall Legacy also contains additional articles on the unique magic items of the adventure, the Sandpoint environs, and the ecology of the creatures known as Oni (these beings will be a major part of the Jade Regent Adventure Path). There is also the usual fiction and bestiary of new monsters. The “Sandpoint Hinterlands” article provides a brief overview of Sandpoint itself, but GMs looking for a more detailed write-up may be disappointed. Pathfinder Adventure Path #1: Burnt Offerings had a full description of the town, but not every GM will have access to that and it is unfortunately out of print now (although the pdf is still available and a full compilation of Rise of the Runelords is being released next year). Luckily, the players don’t spend a lot of time in Sandpoint and thus, most groups won’t need a lot of information on the town.
Overall, The Brinewall Legacy provides a very strong opening to Jade Regent and sets the scene for what looks to be an exciting Adventure Path. I heartily recommend it.
Posted by Michael Ray Johnson at 20:07