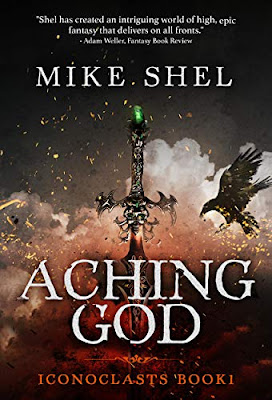 Disclaimer: I received a free copy of this novel from the author in return for an honest review.

Fantasy can be a genre in which it’s difficult to stand out. There’s a lot out there, both good and bad, and a lot of it can be very similar, following the same basic tropes and formulas. Indeed, it’s often expected to follow those tropes and formulas. Aching God is a novel with many of the usual trappings of fantasy, particularly those established in roleplaying games like Dungeons & Dragons and Pathfinder. It involves a quest (perhaps the most iconic trope of fantasy). There is lots of magic, some of which is practised by sorcerers who have different kinds of specialisations. Other magic is used by followers of the various different gods, who grant their priests spells that can heal or protect. While there are many gods, their worshippers tend to follow one solely rather than worship them as a pantheon. The world also has warriors and roguish types, and of course there are monsters and other kinds of threats and challenges for the heroes to face.

I will confess, it took me a little while to get into the book because, at first, there didn’t seem a lot to differentiate it from all the other very similar fantasy out there. However, it wasn’t all that long. After a couple of chapters, the book begins to establish its own identity as we begin to learn a bit more about the world. By around the fourth chapter or so, I was hooked.

This is author Mike Shel’s first novel, though he has previous writing credits on several roleplaying game books, including the Pathfinder adventures Curse of the Lady’s Light and Valley of the Brain Collectors, amongst others.

Fantasy novels tend to have one of two kinds of protagonists: the young adult just learning of their abilities and coming of age, or the grizzled veteran often called out of retirement. Aching God has the latter kind. It centres around Auric Manteo, a former member of the Syraeic League, an organisation dedicated to exploring ancient ruins and bringing back relics from the past. When one of those relics causes a virulent illness to spread amongst League members, including Auric’s daughter, Auric comes out of his retirement to perform the unusual task (for the League) of returning the relic to its place of origin.

Auric left the League after traumatic experiences in the Barrowlands, a region filled with the ruins of an ancient civilisation called the Djao. The relic the Auric must now return came from the Barrowlands, so Auric must also face his own personal demons in order to complete the mission.

Auric is joined on his journey by several companions. These include Belech, an older warrior, assigned to look over him by Auric’s former lover, the baroness of the region Auric has lived in for the last few years. Del, Lumari, and Gnaeus are all young members of the League assigned to accompany Auric. Del is a sorcerer, while Lumari is a promising alchemist, and Gnaeus is a flamboyant swordsman. Finally, there is Sira, a young priestess of the goddess Belu. Along the way, this group of six occasionally travel with others.

All the characters are distinct with well-drawn personalities and motivations. This is true of the main characters as well as supporting characters (Hraea, the captain of a ship Auric and the others travel on, is a particularly good example). I found I grew to really like all the main cast, and I was definitely invested in seeing them succeed. That said, apart from Auric, most of the main characters don’t really have a personal arc and don’t go through much in the way of changes. By the end, they are essentially the same people they are at the beginning. The one notable exception to this is Del; however, her personal development is there primarily to serve Auric’s development. Of course, there’s not much opportunity in this book to show how the events of the completion of their quest affect them in the long term. I’ll be interested in seeing how any of these characters who return in future books (Aching God is the first in the Iconoclasts series) have changed because of the traumatic events they experience here.

The majority of the book consists of the journey to the location where they must return the relic and the obstacles they must face on the way. I was pleased that the portion of the story that takes place in the underground ruins is relatively short, even though the book’s climax does take place there. Dungeon crawls are my least favourite form of roleplaying adventure and I find they translate to narrative even more poorly. That’s not to say they can’t be done well in narrative form, but doing so generally involves keeping them short, which is what happens here. Also, in this case, keeping it short makes the arrival at the “dungeon” a more momentous event, as it’s the culmination of the quest as opposed to just the next step along the way.

The novel is entirely from Auric’s point of view. However, there are occasional segments which detail the history of the setting, and I must admit, while reading, I was never quite sure whether these are meant to be Auric thinking about the history, or if the narration has simply switched to a third person omniscient perspective instead of the third person limited used for remainder of the book. Either way, this isn’t generally my favourite way of learning about setting. I prefer to discover it rather than be told it. Nevertheless, Shel does it really well and it works for this story. I found myself quite engrossed by some of it, particularly the background about the rule of Queen Geneviva, the unnaturally long-lived ruler of the country of Hanifax. While a lot of this doesn’t seem to have a lot of immediate relevance to this particular story, it does seem to be setting things up for later novels in the series.

Indeed, there are quite a few things in Aching God that are clearly foreshadowing later books (such as Auric’s acquisition of a mysterious magical sword), but nicely, they don’t detract from this opening story. There is a clear beginning, middle, and end to Aching God. It provides just enough foreshadowing to interest readers in continuing to the next book, but also provides a satisfying enough conclusion that readers could stop here and still feel that they have read a complete story.

Most important, though, is that that complete story be an enjoyable one, and this is certainly the case with Aching God. It’s an engaging and fun book full of high adventure. There are moments of excitement and tension, a few twists and turns, and some sad and tragic parts. I enjoyed it a great deal and I look forward to the next instalment in the series.
Posted by Michael Ray Johnson at 22:56