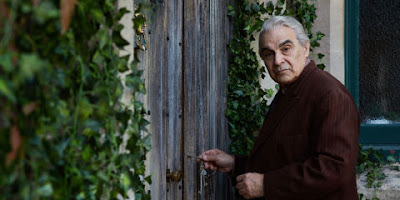 Performances can make or break a programme. While there are many things that go into making a television show or movie (script, direction, cinematography, etc.), the performances are frequently one of the principal things by which the final product is judged. A bad performance can lessen the audience’s enjoyment even if everything else is perfect. Similarly, a great performance can elevate an otherwise weak programme. That’s not to say other aspects are not important (goodness knows I frequently take issues with the scriptwriting in my reviews) and can’t also similarly weaken or elevate a product, but performances do tend to stand out just a little bit more. They are, after all, what the audience most directly experiences.

The latest Doctor Who episode, “Knock Knock” by Mike Bartlett, would likely be a fairly enjoyable, yet not particularly memorable episode with most actors in the main guest role. However, with David Suchet (best known for playing Agatha Christie’s Poirot) in the role, it becomes absolutely phenomenal. Suchet gives one of the greatest performances the programme has seen, and that’s not something I say lightly. Doctor Who has had a lot of good actors giving great performances over the years, but Suchet stands above most of them.

What I find most impressive about Suchet’s performance is how well he portrays a grown-up child. The moment when it is revealed that the Landlord is actually Eliza’s son and not her father is one of those moments I did not see coming but which makes perfect sense in retrospect. And the reason it makes so much sense is due almost entirely to Suchet’s performance. 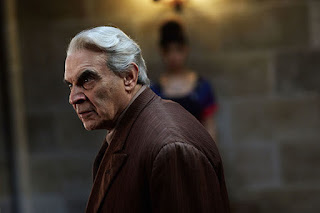 There’s not really anything in the actual script to suggest this in advance of the reveal. The only possible exception is, when the Doctor initially asks the Landlord if he has any children, the Landlord stumbles in his reply. It’s difficult to say whether this is scripted, a directorial decision, or simply something Suchet added himself. However, beyond this, it all comes down to Suchet. Throughout, he plays the role in such a way as to suggest a grown-up child. This is a man who has experienced very little of the world around him, having hidden himself and his mother away from it all, and only venturing out occasionally. While he has aged physically, he still moves about and acts in a very childlike manner.

Indeed, the performance is absolutely sublime. He moves from anger to fear to sadness in an instant, yet utterly believable way, and in doing so creates one of the most sympathetic villains seen on Doctor Who. The moment of his and his mother’s deaths is actually somewhat heartbreaking even though we know that he is getting his just reward. He has been directly responsible for the deaths of a couple dozen people and is a pretty despicable person, but we feel for him nonetheless.

Doctor Who can have a tendency to have rather one-dimensional villains, and while characters like the Master/Missy can be a lot of fun to watch, I really like when villains are given a little more depth and motivation. The Landlord excels in this regard. 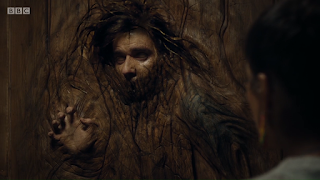 Of course, there’s more to “Knock Knock” than just David Suchet’s performance as the Landlord, and much of it is very good. There’s an appropriate sense of creepiness to the episode, although some moments are rather cliché (the lightning flashes over the house come to mind) and once the “lice” are revealed, some of that creepiness is lost. I liked it better when the house was swallowing people. Pavel being absorbed into the wood is far more frightening than a bunch of bugs just disintegrating people. This is entirely a personal taste issue, though. I’m sure to many people, the idea of being swarmed by bugs could be the more frightening part.

Ultimately, the Landlord himself is the creepiest part of “Knock Knock”. He has successfully convinced his mother that she is actually his daughter and he keeps her hidden away in an old house where, every twenty years, he sacrifices six people to the lice to keep her alive. It’s hard to think of very many things creepier than that.

As with each of the prior episodes this series, we get some further development of Bill. This time we get to see a bit of her life away from the Doctor (although naturally, the Doctor intrudes upon it). We meet her friend Shireen and see her meeting new people and moving out of her home. I think these are important things to see. However, I will admit to a worry.

During Steven Moffat’s time as showrunner, the Doctor’s companions have had very inconsistent personal lives. Family members or friends show up once, or maybe twice, and then are never heard from or mentioned again. Best friends who have supposedly been around since childhood yet mysteriously never previously mentioned show up out of nowhere. Homes and jobs change out of the blue. And so on.

It’s too early to say how consistent things will be with Bill, yet there are some worrying signs. Her foster mother, introduced in “The Pilot”, is conspicuously absent in this episode. Of course, scheduling actors (particularly for what would likely be a brief appearance) is not always possible, yet her foster mother isn’t even mentioned.

It’s also a bit unclear just how much time has passed since the last episode. A lot of time clearly passed in “The Pilot”—a significant portion of a whole school year—and the following two episodes happened in quick succession immediately after. This episode seems to be at the beginning of a new school year, which would probably make it a few months. Is Bill a full-fledged student now? The Doctor said in “The Pilot” that he would take care of things and the impression in this episode is that she is, although it’s not entirely clear. And so we end up with another possible inconsistency in Bill’s personal life—or a sudden change without any context, similar to (though not as jarring as) Clara being a nanny and then suddenly having a new job as a teacher with no previous mention of her having any education or training for such a position.

These worries may well turn out to be nothing. As I said, it’s too soon to say for sure, but the nagging worry is definitely there. It will depend a great deal on whether we see characters like Shireen and Bill’s foster mother again or if they just fade away without any further mention. 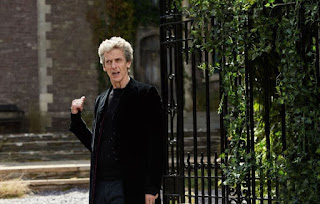 It is really nice to see a different side to Bill and the Doctor’s relationship. Bill sees her personal life as being very much separate from the Doctor, and so when he intrudes upon that personal life, she starts to get impatient with him. We also see that, while she respects and enjoys the part of her life that is with the Doctor, she also worries that being seen with him could hurt her image amongst her friends, and so she gets embarrassed by his presence.

The Doctor, likewise, is a joy to behold in this episode. Peter Capaldi is in fine form (even if David Suchet does manage to outshine him). I love the Doctor’s excitement at seeing the first of the lice—of encountering a lifeform he’s never encountered before. This is such a pure Doctorish moment, finding awe and wonder, even in a moment of life-threatening danger. 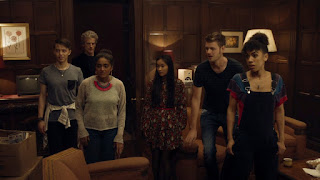 Bill’s housemates are less interesting than the other characters. The limits of a 45-minute episode and the fact that they have to be “killed of” one by one make mean that there isn’t really much opportunity to develop them. That said, each one is quite distinct with some easily identifiable traits, even Pavel, who is the first to “die”.

I’ve deliberately put “killed off” and “die” in quotations for the obvious reason that these characters don’t really die due to the convenient reset at the end which restores them all. I suppose it can be argued that they don’t really die to begin with; they are just absorbed for eventual feeding (though Harry and Shireen, whom we see actually swarmed by the lice, seem to completely disintegrate at these moments). But, as people who have read my reviews know, I don’t like Doctor Who’s tendency in recent years to reverse death on a regular basis and to avoid consequences.

If a character like Shireen were to die, this would have a major impact on Bill, something that Steven Moffat and company may want to avoid. But in this case, maybe just not kill off Shireen to being with. It would help avoid the other rather convenient fact that the Doctor and Bill just happen to be last on the lice’s menu if one other person makes it to the end with them. Alternatively, if the episode established earlier that the characters were still alive, just in holding until their energy could be consumed, then saving them at the end would make more sense.

I am also bothered a bit by the fact that, apart from Shireen, none of the others display any actual reaction to the fact that they were eaten/absorbed by the house/lice. Instead, they simply comment on losing the house and their deposit. Shock, perhaps, but it’s not well illustrated.

It’s also a bit strange that, once the house disintegrates, the Doctor just considers the matter over and leaves. Are the lice gone now just because the house is gone? Do they die along with the Landlord and Eliza? I guess that’s what the Doctor thinks. 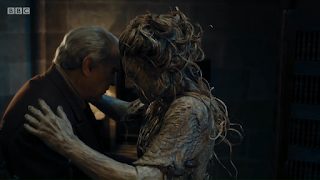 A few quick thoughts:
At its core, “Knock Knock” is a decent, but not amazing episode. Yet it’s an episode I can happily rewatch many times entirely due to David Suchet’s performance, which is simply spellbinding.
Posted by Michael Ray Johnson at 12:22