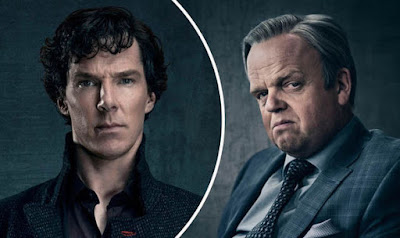 Sherlock can be a frustrating show sometimes. It is a show that is hugely enjoyable, yet at the same time can be infuriating as it gets too caught up in itself or tries to do too much. This was a major issue I had with the Series 3 finale, “His Last Vow”, and it is an issue I have with the second episode of Series 4, “The Lying Detective”.

Written by Steven Moffat (who also wrote “His Last Vow”), “The Lying Detective” is full of absolutely wonderful moments, with great performances (particularly from Toby Jones as Culverton Smith), tense scenes, and some clever plotting. But they work best as set pieces. As a whole, the episode jumps from moment to moment, often through time with flashbacks and flash-forwards, never pausing for a moment to breathe, and never allowing the audience a chance to get to know and empathise with its characters. And while it does have some clever twists and reveals, it relies far too heavily on Sherlock Holmes making deductions that are even more impossible than what he’s generally capable of. In short, there is a lot of wonderful eye candy, but it all doesn’t quite hold together as a coherent whole.

In any fantasy (and make no mistake, Sherlock is fantasy), we accept a certain amount of the impossible as the premise around which the fantasy is built. Depending on the fantasy, the amount of the impossible accepted can vary. In the case of Sherlock Holmes, we accept his ability to make astounding deductions about people and things from a mere glance—leaps of logic that no real person could ever make so accurately in so quick a time. It is around this ability that first Arthur Conan Doyle and then other authors have woven stories that have delighted millions.

However, we accept these impossible things within certain parameters. Every good fantasy has rules within which its impossible things operate. We accept Superman flying through the air and firing beams from his eyes because it is within the parameters of his story, but if Han Solo suddenly did the same thing, we would rightly find this wrong. In the case of Sherlock Holmes, we accept that his abilities still exist within a world that, for the most part, obeys all the same physical laws that our real world does. This means there is a limit to how much deductive power we can accept from him. After all, if he deduces the solution to the mystery right from page one, there isn’t much of a story to tell. 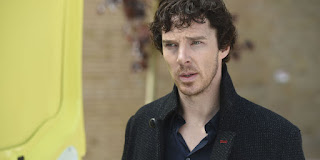 This is the heart of my biggest issue with “The Lying Detective”. Sherlock’s ability to make deductions reaches a level of absurdity that it is simply no longer possible to “turn off my disbelief”. It’s par for the course for him to be able to deduce details about a person’s personality, social circle, and past from various aspects of their appearance; however, predicting with perfect accuracy what a person will do weeks in advance? While he’s high on drugs?

One of the things I really liked about the previous episode, “The Six Thatchers”, is that it shows a Sherlock Holmes with limits. He can still make amazing deductions, but he isn’t perfect. Sometimes he makes mistakes. There’s a wonderful moment in “The Six Thatchers” that I only touched on briefly in my review. When I first watched that episode, during the montage when Mary is travelling all around the world, rolling dice to randomly choose her destinations in order to fool Holmes, I expected Holmes to still find her, and I expected some over-the-top pseudo-explanation as to how he would do it. Thus I wasn’t at all surprised to see Holmes waiting for Mary at her last destination, and at first he gives exactly the type of explanation I was expecting, only to then laugh it off and admit that he simply placed a tracer on the flash drive she is carrying.

It’s a beautifully simple explanation to show how Sherlock (and in this case, at the suggestion of John Watson) thinks just a little ahead of everyone else. On a metal-level, it’s also a wonderful moment of the show poking fun at itself. This was Sherlock admitting that it has a tendency of going over the top at times, and having fun with that fact. But in “The Lying Detective”, the show is not poking fun at itself. Viewers are expected to accept that Sherlock is virtually omniscient, able to predict everyone’s actions literally weeks in advance to such a degree that he can deliberately place himself in harm’s way knowing that he’ll be rescued at the last moment.

And his only mistake? Being two minutes off on a prediction when one character will arrive. Oh, and strangely not recognising his own sister—although that may be because he hasn’t seen her in a very long time, possibly since childhood. It’s even possible that he has blocked the memory of her. More on that in a bit. 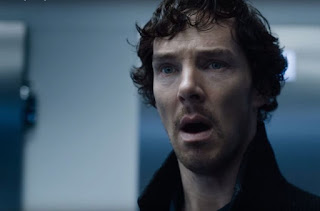 My other issue with the episode is the pacing, the way it rushes from one scene to the next without offering time to breathe. The episode actually sets up a really interesting situation with some compelling characters and issues, yet it never really takes time to explore those things. Characters only interact briefly with one another before we rush into the next scene or flashback to an earlier one, sometimes to jarring and exhausting effect. The morgue scene when Sherlock attacks Culverton repeatedly jumps forward to a completely unnecessary scene with John and Lestrade at the police station before jumping back and then forward again. To a certain extent, the rapid jumps or bizarre moments of slow motion are clearly intended to convey Sherlock’s drug-addled state, but there’s too much of it. After a while, it becomes dizzying and annoying, and the time jumps destroy any sense of tension.

All of this is symptomatic of attempts at overly clever plotting, a desire to make the show seem as brilliant as its protagonist. At its heart, “The Lying Detective” is a fairly simple story. Sherlock risks his life to both save his best friend John and expose a serial killer. There actually isn’t much of a mystery, so in order to create the appearance of one, the story hides most of the details from the viewers. But why not just tell a simple story and concentrate on the characters? “The Six Thatchers” shows that it’s possible. 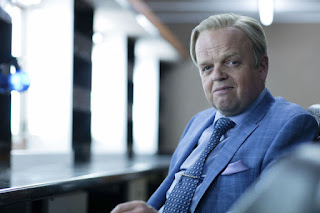 Yet amid all these frustrating aspects, there’s much brilliance in “The Lying Detective”. Toby Jones gives a spellbinding performance as Culverton Smith. The episode tries to give us background information on his character with rapid glimpses of television appearances that jarringly interrupt other scenes, yet these are completely unnecessary. Jones’s performance and the reactions of other characters to him give us everything we need to know. And there is such subtlety and nuance to the performance, allowing us to believe that he is both loved and feared by the people around him.

One of the best scenes in the episode is the one with the children in the hospital. Although Culverton’s crime is different, there are definite shades of Jimmy Savile* and it is incredibly unnerving. Yet this scene does so much to develop Culverton into one of the best villains Sherlock has ever had. 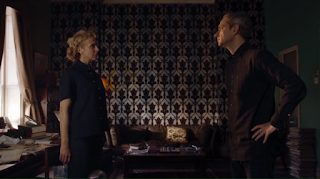 There are also some great and moving scenes between Martin Freeman as Watson and Amanda Abbington as his grief-induced hallucinations of Mary. Having a character talk to a dead loved one in this way is a bit cliché and overused, but the scenes are so well done that it’s easy to ignore this issue. I just wish the episode would spend a bit more time dealing with John’s grief instead of rushing around.

Then there’s Euros, Sherlock and Mycroft’s secret sister. I must admit that this reveal was exceptionally well executed. For some time now (since Series 3 at least), the show has been hinting at a third Holmes sibling, and we’ve been getting glimpses of a traumatic moment from Sherlock’s childhood involving his beloved dog—one it seems Sherlock doesn’t remember clearly. It seems likely that he has blocked the memory of Euros completely. 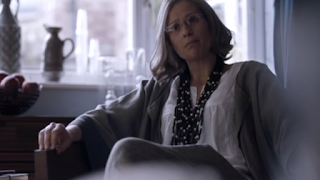 I do like how the show plays with gender expectations here. There is actually nothing before John jumps to the conclusion of a secret brother in this episode to suggest it’s a brother. Mycroft has not used pronouns in reference to this person (that I can remember, at any rate) and the name that has been mentioned—Sherrinford—doesn’t really say much. Indeed, the way it’s used, it could easily be a location. “Have you called Sherrinford?” Lady Smallwood asks Mycroft at one point. This doesn’t necessarily have to be a person’s name. John simply expects a male sibling in the same way most viewers probably expected one. It’s an unfortunately reality of the way society works. Male is the expected default, and women still have to fight to be noticed and acknowledged.

What works best though is how she was there in plain sight and yet unnoticed—something that fits with the theme of this episode too, with Culverton Smith hiding in plain sight. When I first saw John’s new therapist, I initially thought she looked a bit like the woman he was having an affair with last episode (an affair that turns out to have been just texting each other a lot), but I shrugged it off as merely similar-looking actresses. And Siân Brooke sells each of Euros’s roles perfectly, making them seem enough like separate people, yet believably the same person once it is revealed. I like, too, that the amount of disguise she uses is actually quite minimal, little more than a wig and contact lenses—and no prosthetics. I look forward to seeing how Euros and Sherlock will interact (and, of course, to the resolution of the cliffhanger ending). 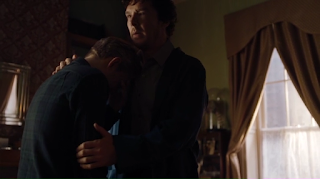 So, in the end, “The Lying Detective” is a pretty good example of both the best and worst of Sherlock. The dichotomy is not as great as in “His Last Vow”, but it’s frustrating all the same. I suspect “The Lying Detective” will fit the pattern of the middle episode of each Sherlock series being the weakest.

*For those outside the UK and unfamiliar with Savile, in short, he was a British presenter whose work frequently involved children, but he was also sexually abusing children the entire time. Fame, money, and powerful friends kept him from being prosecuted. The full story of what he did did not come out until after his death in 2011.
Posted by Michael Ray Johnson at 02:23