Doctor Who - The Return of Doctor Mysterio 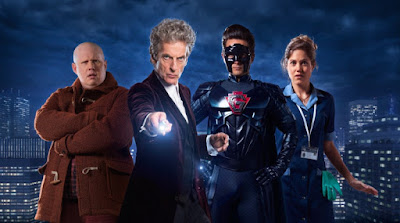 It’s been an entire year since “The Husbands of River Song” first aired, and in that time, there has been no other Doctor Who at all, until now with “The Return of Doctor Mysterio”. It’s been a very noticeable gap. Since Doctor Who returned in 2005, there hasn’t been another year quite like this one. There have been years with a smaller-than-usual number of episodes, but never one with an episode count of only one (not even the so-called “gap year” in 2009 had so few episodes). Indeed, this is the first time two Christmas specials come back-to-back in episode order.

However, a long gap can increase the desire to see new episodes and that certainly was the case with me. I was eager to watch “The Return of Doctor Mysterio” as soon as it aired. But I was also worried. I had to watch it at my parents’ place, which meant making them watch it too, and my parents have little love for Doctor Who these days (despite my mom being a big fan of the original series). By the end of the episode, my fears were confirmed. My parents talked quite a bit about just how terrible the show is these days, and there wasn’t much I could say to argue with them because I kind of agreed—for this episode, at least.

On initial viewing, I was not that impressed by “The Return of Doctor Mysterio”. However, on a second viewing a couple days later, my opinion improved somewhat (which is a trend I’ve noticed happening with episodes by Steven Moffat). I found more things to like about it, even though my initial issues remained.

It’s not really that bad an episode. There have certainly been far worse ones, but there have also been much better ones, too. For a Christmas episode, it does what it needs to do, which is provide light-hearted entertainment and be accessible to casual viewers. It has lots of fun moments, with some knowing nods to superhero tropes. Yet at the same time, it has some rather paper-thin characterisations and alien villains that manage to be both creepy and boring (their basic concept is creepy, but they have no personality). Overall, it’s a rather mediocre episode and not one that’s likely to prove all that memorable, but it is enjoyable.

Doctor Who can do just about any kind of story. Yet every now and then, an idea comes along that really puts this to the test. On the face of it, a superhero story is one such idea. It seems just a little too absurd. Yet when you think about it a little more, it actually makes perfect sense. After all, Doctor Who is pretty much a superhero series as it is, just disguised in the veil of time travel and aliens. The Doctor is not a conventional superhero, but he is most certainly a superhero, arriving to save the day in the nick of time. In recent years, he has taken on greater and greater threats, and the villains fear him and sometimes even turn and run when he appears. 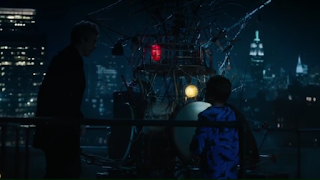 So a story with a literal superhero in it alongside the Doctor is a great opportunity to explore the tropes of both superhero comics/movies and Doctor Who itself. Indeed many of the greatest moments in “The Return of Doctor Mysterio” are when the episode knowingly makes nods to, and even spoofs, these tropes. I adore the moment when the Doctor “discovers” that Superman and Clark Kent are the same person, and the subsequent conversation with young Grant about what happened to Peter Parker after being bit by a radioactive spider. I love how the episode provides us with a critique of the absurdities of superhero comics (the Doctor guessing that Peter Parker’s powers must include vomiting, hair loss, and death), and then immediately (and quite knowingly) follows this up with the show’s own absurdities of the Doctor’s “time distortion equalizer thing” (so named because any attempt to give it a proper name would be just as absurd) and the Doctor being able to carry a full glass of water in his pocket—and when asked how he can do that, brushing it off with, “Skills.” I should also not neglect to mention these early moments of the episode drawing a direct parallel between the Doctor and Santa Claus, another kind of superhero.

Of course, the story of the Ghost/Grant and Lucy Fletcher directly mirrors the comic story of Superman/Clark Kent and Lois Lane, right down to the virtual love triangle of the superhero competing with himself for the woman’s attention, and that woman being unable to recognize that the superhero and his alter-ego are in fact the same person (although, to be fair, the Ghost’s costume disguises him a bit better than Superman’s does). Unfortunately, this is where the episode is much less successful. Unlike the scenes with young Grant, the episode never really takes the opportunity to explore what these tropes mean or to comment on them. It just plays it straight. That might not be so bad if there was anything interesting about the relationship, but there really isn’t. Neither Lucy nor Grant have much character beyond their dictated roles, and there’s not much opportunity to feel empathy for them because we never really get to know them. 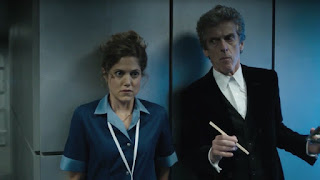 This hurts Lucy’s character a great deal more as she ends up in the very stereotyped female role of the love interest who does little except provide the motivation and “prize” for the male hero. This is unfortunate since she is, at first, presented as a competent journalist uncovering an important story. She has managed to sneak into the Harmony Shoal building and to investigate the strange things happening there. Yet everything she learns on this occasion has already been discovered by the Doctor, and from that point on, the Doctor does all the investigating, while she just arranges an interview with the Ghost—which she actually views as more of a date than an interview. In the end, nothing she does has any real consequence.

Consequence is something that comes up a lot in my reviews of Steven Moffat’s Doctor Who—or more accurately, the lack of it. When Lucy finally does learn that Grant is the Ghost, they just get together and prepare to live happily ever after, despite the fact that Grant has been lying to her for a long time. Yet there are no repercussions. I’m not necessarily expecting her to suddenly hate him for it, but she’s not even a little bothered by how casually he’s lied to her? The show had a wonderful opportunity to examine this trope and say something meaningful about it, yet completely neglects to, despite doing that with the early scenes with young Grant. 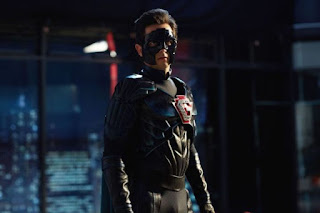 In the case of Grant, he’s a better character as a child. Steven Moffat has a fascination with having the Doctor meet other characters when they’re children. It’s something that I’ve found rather tiring from overuse, but here, it works well. The scenes nicely set up a character obsessed with comic books who, when given the opportunity, acts out his obsession in real life. But then there’s no follow-through with adult Grant. He spends time as a superhero, wins his prize (whom he’s basically been stalking since childhood, which is a little creepy—and not the good kind of Doctor Who creepy), and then...stops. Apparently. There’s no consequence to the Ghost’s existence—on Grant’s life, on Lucy’s, or even the rest of the world. 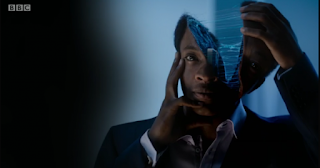 Moving away from Lucy and Grant, the rest of the episode is fairly standard Doctor Who, complete with an alien invasion. The invasion plan is really quite clever and original. I like that aspect of it, and the aliens themselves are suitably creepy (the good kind). The individual aliens don’t really have much in the way of personality, however. This isn’t that unusual for a lot of Doctor Who aliens, but in this case, once you get past the fear factor, they’re rather boring and don’t actually do a whole lot in the scenes they’re in, other than talk about what they intend to do. They make a lot of threats but never follow through and their scariness starts to whittle away. 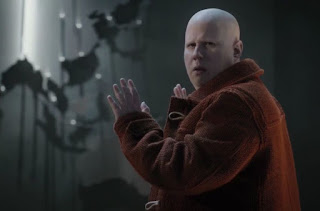 Then there’s Nardole. I must confess, I rather like Nardole in this episode. He’s a bit of a pointless sidekick in “The Husbands of River Song”, but here, he grows beyond the sidekick role, displaying quite a bit of wisdom and intelligence. We get hints at a much deeper character than his previous appearance. It’s unclear exactly why the Doctor un-beheaded him and dragged him along, but I assume this will be explored more in the future. It seems that he will be around for a little while, which means we’ll have two companions for the Doctor next season (or part of it, at least). Doctor Who tends to work better with only one companion (although there have been exceptions to this), so I have my concerns, but I’m also intrigued to see where it leads. Some great things could come of it. 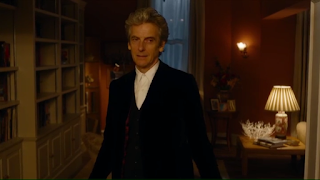 Finally, there’s the Doctor himself. Peter Capaldi is on great form, as always. While I wasn’t moved by the Lucy/Grant story, I was definitely moved by the Doctor/River Song story. Even though River doesn’t appear in this episode, Capaldi certainly makes her presence felt at the end. It also makes this one of the few occasions of this story actually including consequence through the effects of River’s death on the Doctor. The Doctor’s final words to Lucy and Grant are incredibly touching:

"Things end. That’s all. Everything ends and it’s always sad. But everything begins again, too, and that’s always happy. Be happy. I’ll look after everything else."

A few quick thoughts:
Overall, “The Return of Doctor Mysterio” is no masterpiece. It’s actually pretty mediocre as Doctor Who goes, but even mediocre Doctor Who is entertaining. It’s not an episode I’m likely to return to much, if at all (apart from doing complete runs of the series), but it’s a decent way to spend sixty minutes.
Posted by Michael Ray Johnson at 22:23