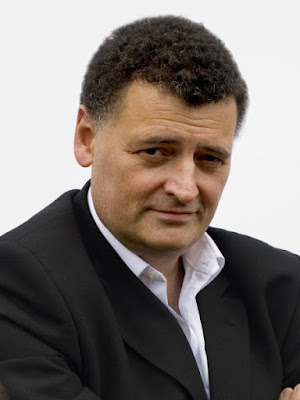 The BBC announced today that Steven Moffat will be stepping down as Doctor Who's showrunner after Series 10. Not surprisingly, there has been a lot of online response from Doctor Who fans, with responses ranging from jubilation to heartfelt sadness and everything in between.

Readers of this site know that I have been highly critical of Steven Moffat's time on the show. I've criticised his portrayal of women, poor characterisation, his avoidance of consequence (through characters dying and coming back to life shortly thereafter), and numerous other things. That said, I wouldn't still be watching the show if I hated it, and there has been a lot of very good things during Moffat's time. There have been stand-out stories, great performances, some great writers and directors, and more. In particular, I think there have been a lot of improvements in the last couple series and indications that Moffat has been paying attention to the criticisms against him and trying to improve. Series 9 has some of the most diverse casting in all Doctor Who, for example.

But whether you love or hate (or anything in between) Steven Moffat, his departure is ultimately a good thing—not because of any criticisms I or anyone else might have of him, but because Doctor Who is all about change. Upon the completion of Series 10, Moffat will have overseen 6 full series of Doctor Who as well as numerous Christmas specials and, most significantly, the 50th anniversary special, “The Day of the Doctor” (one of the highlights of his time, in fact). This is a great run, longer than most others (only John Nathan-Turner oversaw more seasons), and he has left an enduring mark on the show. But just like companions move one, and just like every few years, Doctors move on, so to do the people behind the scenes move on. This includes the producers and showrunners. Doctor Who thrives on new blood and this time, I have no doubt, will be no different.

Taking over from Moffat will be Chris Chibnall, who has written several Doctor Who and Torchwood episodes in the past. What he will bring to the show as showrunner remains to be seen, but I can be confident of one thing: he will bring something new. I, for one, will be watching.
Posted by Michael Ray Johnson at 22:56