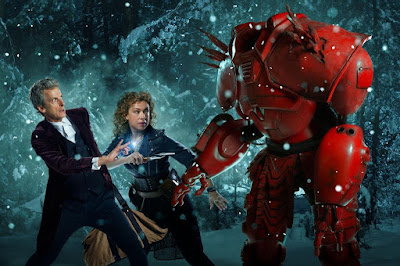 The end of the year approaches and December looks to be a big month for science fiction and fantasy fans. The new Star Wars movie comes out, of course, but there's more going on too. But first, a look back over the month that's passed...

November was a good month. While I always seem to be just a little bit behind what I hoped for (I planned to have one more Pathfinder review up by now), I'm still on target to catching up with everything in about a year from now, and I have high hopes I'll get a lot of extra work done during the holidays this coming month. In November, I completed another seven Pathfinder reviews. They included this summer's big hardcover release, Occult Adventures, which introduced psychic magic to the game. Following along with that theme, I also reviewed a couple of the other recent occult-themed releases: Occult Origins and Occult Bestiary. I will have a review of Occult Realms sometime in December. I also continued my way through the Iron Gods adventure path in November with Lords of Rust and The Choking Tower. Along with those, I reviewed the Technology Guide, which is indispensable to people running the adventure path. Finally, I looked at Champions of Corruption, the third of the alignment books, this one looking at the evil alignments. Coming up next will be a review of this year's Free RPG Day release, We Be Goblins Free!

December sees the release of Pathfinder Adventure Path #100! Part of the current Hell's Rebels AP, it's an extra-large volume to commemorate the milestone. It's hard to believe that I currently have 99 volumes of Pathfinder Adventure Path sitting on my shelves. They take up much less space than you might expect, actually. It's still quite a bit though. When Dragon and Dungeon magazines came to an end a few years ago, I still had several issues left on my subscription, so I used the option Paizo provided at the time to convert the remainder into credit towards their new Pathfinder release. I was hooked pretty quickly and just kept on getting them. Unfortunately, given how far behind I am, it will be awhile before I get round to reading and reviewing #100, but I couldn't let this monumental event pass without at least mentioning it.

Series 9 of Doctor Who continued throughout November, and I kept on with my reviews of each episode. These included the two-parter that began with “The Zygon Invasion” and concluded with “The Zygon Inversion”, the experimental “Sleep No More” and the tragic “Face the Raven”. This past weekend saw the airing of another very experimental episode, “Heaven Sent”. I'll have my review of that up soon. After the conclusion of Series 9 this month, I intend to do something I haven't done previously, and that's to do a separate write-up on the entire series. This is because, while I've highly enjoyed many of the individual episodes, I've felt the series hasn't really held together very well. The overall narrative arc has been quite poor, I've felt, and I want to take the time to look at that in more detail.

For some fun news, just yesterday, Peter Jackson (of Lord of the Rings fame) posted a video about the long-standing rumours that he might direct an episode of Doctor Who. The video was recorded recently when Peter Capaldi was in New Zealand for a convention. There's every chance that the video is just Jackson and Capaldi having a bit of fun, but perhaps—just perhaps—it's a tease before an official announcement that Jackson really will be directing an episode. See my post from yesterday to watch the video.

In other Doctor Who news, the title of this year's Christmas special has been announced: “The Husbands of River Song”. While I have my criticisms of River Song, I am looking forward to seeing her and the 12th Doctor together for the first time. I expect Alex Kingston and Peter Capaldi will be amazing on screen together. Although it hasn't actually been announced, one other thing about the special is discernible from the publicity picture (at the top of this post): the Doctor apparently has a sonic screwdriver again! I'll be happy to see the last of the sonic sunglasses (assuming they'll be gone completely—there's nothing really stopping the Doctor from having both).

Also coming over the holiday season is a Sherlock special: The Abominable Bride. This will air on New Year's Day. Set in Victorian times, it's not technically a continuation of the Sherlock series, but it does contain all the same cast. Here's the latest trailer:

If for nothing else, this will be worth watching for Watson's spectacular moustache!

So December looks to be quite the month (okay, so Sherlock is technically in January, whatever). I'm looking forward to it!
Posted by Michael Ray Johnson at 21:09