Doctor Who - Advance Thoughts on "The Name of the Doctor" 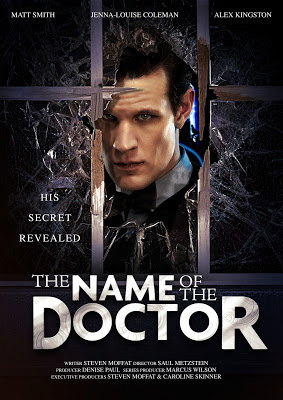 This Saturday, the season finale of Doctor Who will air, and it will supposedly wrap up all the loose ends of the Moffat era, as well as reveal the Doctor’s greatest secret and solve the mystery of Clara. It’s a lot for one episode to accomplish, even at the breakneck pace of all the episodes in Series Seven. But that’s the promise.

Some people have been lucky (or unlucky?) enough to have already seen it due to a distribution error that resulted in a bunch of copies of the Series 7, Part Two Blu-rays being sent out early to people who had pre-ordered. I am not one of those people, and I have done my best to avoid spoilers for the final episode. However, in advance of seeing the episode, I wanted to discuss my thoughts on the subject of the episode’s title, and whether or not we really will learn “The Name of the Doctor”.

The question “Doctor who?” has been a focus of much of Steven Moffat’s time as showrunner, and even in his scripts before that. Both “The Girl in the Fireplace” and “Silence in the Library”/”Forest of the Dead” bring it up. Since the conclusion of Series Six, the question has been brought up repeatedly, often to the point of sounding unnatural, sometimes multiple times per episode. In “The Wedding of River Song”, Dorian calls it “the first question”, and on a meta-level, that’s absolutely true. Way back in 1963, when the first episode of Doctor Who aired, the very first words encountered are the title, and thus the question.


Of course, the question did appear on the show before Moffat’s time. He didn’t make up the idea of the unknown Doctor. In that very first episode, after Barbara refers to the Doctor as “Doctor Foreman” (since that was his pseudonym), Ian says, “That’s not his name. Who is he? Doctor who? Perhaps if we knew his name, we might have a clue to all this.” The twenty-fifth anniversary story “Silver Nemesis” also addresses the topic, and ends with Ace asking the Doctor, “Doctor, who are you?”, to which the Doctor only raises a finger to his lips as a response.

As we approach the fiftieth anniversary of the show, it makes sense that the question of the Doctor’s identity and past should be looked at again. Although I might think that there have been too many utterances of “Doctor who?”, I do understand why the show is bringing it up.

But just like “Silver Nemesis” never actually answers the question, I don’t believe “The Name of the Doctor” will either. Oh, it will reveal his “greatest secret”, but that will be something else. The story will certainly talk about his name to some extent, and perhaps some of the characters will even learn his name, but I don’t think the audience will. Indeed, I think it would be a fundamentally bad idea, and as much as I may criticize Steven Moffat’s Doctor Who, I’m fairly certain Moffat is aware of why revealing the Doctor’s name would be a bad idea.

First off, revealing his name collapses the entire premise of the title, leaving nowhere else to go. If we know the answer to “Doctor who?”, the show loses part of its core, and somehow just wouldn’t feel the same. Of course, the show has gone through major changes and revelations before and survived, and it probably could here, too, but it would lose something.

But there is a much greater reason why revealing the Doctor’s name would be a bad idea, and why I believe that we won’t learn it: The reveal cannot possibly have the dramatic power it’s been hyped up to have.

Ultimately, a name is just a bunch of sounds, just like any other word. Its meaning and any power it contains comes entirely from the associations we make from those sounds. Words (and names) can hold real power over us emotionally, but in order to do so, we must associate them with something that affects us emotionally. There simply isn’t any name in the universe of Doctor Who that contains that kind of emotional connection for the viewers. Sure, it’s possible for the show to tells us that any name has power over the characters, but for a reveal like this to work, it has to have power over the audience as well.

Part of the problem comes from just how important the Doctor’s name has been made out to be in Moffat’s Who. It’s gone from just being something we don’t know, to the most important thing in the universe. “The question that must never be answered,” Dorian says. The Silence, a massive time-spanning organization, has spawned simply to prevent the Doctor’s name from ever being revealed. Moffat wants us to believe that, somehow, the Doctor’s name contains power over all of time and space. A character as important and powerful as the Doctor needs an equally universe-shattering name. And there is simply no collection of sounds that will hold that kind of power over the viewers. (As an aside, Charlie Jane Anders on IO9 has a fabulous article on what she feels is the central problem of Moffat’s Doctor Who, namely that it’s too much about the Doctor. The Doctor has gotten too big, and almost paradoxically has become too small as a result. It’s a great read. Check it out.)

In order for a reveal like this to work, it would have to be a name that is familiar to the viewers, one that has been developed on the programme, but few people have previously thought to associate with the Doctor. It has to simultaneously shock the viewers and make them go, “Of course! That makes so much sense!” For example, if throughout the history of the show, we had learnt about a terrible villain from Gallifrey’s past (let’s call him Bob), someone who had committed terrible crimes and destroyed countless worlds, and then the Doctor’s name was suddenly revealed to be Bob, this could be a shocking and powerful moment (it would have to be handled much better than my one-sentence example ever could, of course). However, the show doesn’t have a Bob or another name that has enough history to it.

To be fair, there are a couple of names that could have some impact to long-time viewers. Revealing the Doctor’s name to be Rassilon or Omega could be shocking to those people (especially given the continuity issues that would cause). But the show also has to take into account those members of the audience who are only familiar with the modern incarnation of the show since 2005, and the modern show hasn’t built on the mythology of Omega or Rassilon. A case in point is “The End of Time Part Two” when the Time Lord president’s name is revealed to be Rassilon. This moment might make long-time fans’ jaws drop whilst provoking no reaction at all from newer viewers who don’t know who Rassilon is. However, in “The End of Time Part Two”, the president’s name is not central to what is going on. It’s a bit of side information that’s nice for the older fans and doesn’t in any way impede the enjoyment of newer fans. To reveal the Doctor’s name as Rassilon (or Omega) would just leave newer viewers saying, “Who?” In effect, for them, “Doctor who?” still hasn’t been answered.

I suppose revealing that the Doctor’s name is actually the Master and that his archnemesis all these years has been himself might work to a certain extent. But “Master” is just a title too, and not a name revelation at all.

With no in-universe names to draw on, the only other way to make the name recognizable to viewers is to take a name from real-world history or mythology. Tons of these names might surprise or even shock viewers, but I’m hard-pressed to think of any that would also make viewers think, “Of course!” Giving the Doctor a villainous name like Hitler would just disgust viewers, no matter how much good the Doctor has done over the years. Giving him a more heroic name like Odysseus might result in reactions of “That’s kind of cool,” but also, “That’s all?” That kind of reveal would end up anti-climactic.

There have been a number of allusions in the show to the Doctor being a quasi-god-like figure, from referring to him as the “Lonely God” to some fairly prominent Christ imagery in stories like “Last of the Time Lords”. However, giving him the name of a mythological god like Odin or Zeus would still be somewhat anti-climactic as those gods don’t really fit the character of the Doctor. And revealing the Doctor’s name to be Jesus would just create a level of controversy that I doubt the BBC would let even Steven Moffat get away with.