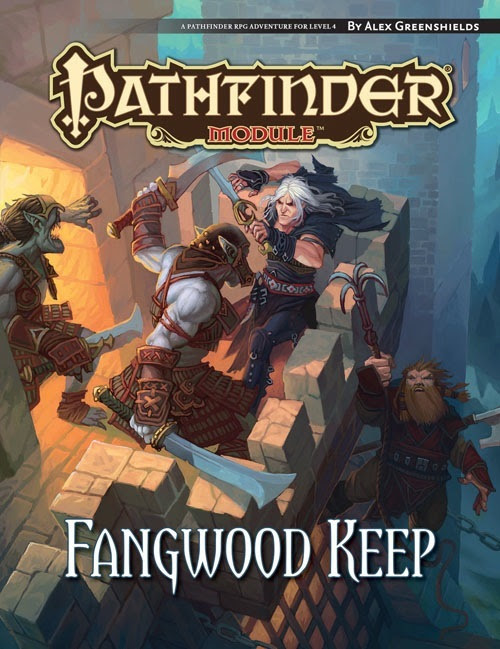 The border between Molthune and Nirmathas is a volatile area of Golarion. The two countries have been in a state of hostility, if not all-out war, for a long time, ever since Nirmathas broke off from its parent country, Molthune. It’s an area that is ripe for adventure and the setting of Fangwood Keep by Alex Greenshields. In the adventure, the PCs must retake a border fort (the titular Fangwood Keep) from a rogue Molthuni force that has taken it without orders to do so. It’s a very straight-forward and open-ended adventure. There’s a bit of a mystery to be solved (why did the Molthuni force go rogue and what are they after?), but overall, there’s not a lot of complexity here. However, the adventure’s basic simplicity is ultimately its strength. It sets a scene with fully detailed characters and motivations and then lets the PCs take care of the details. It makes very little in the way of assumptions about the PCs—not even which side they’re working for—allowing the adventure to progress in whatever way it happens to, in the end making for a fun and exciting adventure.


In Fangwood Keep, the PCs are tasked by either Molthune or Nirmathas to retake the keep from Vos’s Strikers, the rogue Molthuni irregulars lead by a man named Pavo Vos. If they are working for Molthune, their job is to remove Vos so that the keep can be handed back to Nirmathas. Although the keep has often changed hands during the struggle between the two countries, it was under Nirmathi control before Vos’s Strikers took it and Molthune has reached an agreement with Nirmathas that it will remain in Nirmathi control for the time being. If the PCs are working for Nirmathas, their goal is the same, except that the keep does not need to be turned over to Molthune afterwards.

Upon reaching the keep, the PCs discover that most of Vos’s Strikers are now dead, replaced by hobgoblin mercenaries commanded by Vos and his lover Elessia. During their investigations, the PCs discover that the keep was built on top of the ruins of an ancient wizard’s tower, and it’s the secrets of this tower that Vos and Elessia hope to uncover and what led Vos to go rogue.

Exactly how the PCs get involved in the adventure is left primarily up to gamemasters to fit into their own campaigns. The adventure works best as part of an ongoing campaign set in Molthune and/or Nirmathas. That way, the PCs are already familiar with the political situation and the military figures who give them their mission (which also explains why the PCs are chosen for the mission). This also gives them a strong incentive to take part in the adventure, rather than just relying on payment as motivation. However, with only a small amount of work, a gamemaster could easily make the adventure work with PCs from elsewhere, especially if those PCs have a wide-reaching reputation.

While Fangwood Keep itself is, essentially, a dungeon, the adventure rarely feels like a dungeon crawl (except perhaps at the end, when the PCs venture below the keep). This is because the keep comes across as a lived-in place. Unlike a lot of dungeons, it is not needlessly large. It has exactly the number of rooms it needs to function believably (except lavatories, but those are bizarrely absent from a lot of adventure locations), without any extra that seem to be there just to put in more monsters. While guards have various stations, the NPCs don’t necessarily stick only to one location. They move about depending on the time of day and on whether the keep is on alert or not, and their reactions to alerts or the PCs’ presence are logical and consistent. The fact that the hobgoblins are new to the place also means that they don’t know about all the secret passages yet, allowing the PCs to move about stealthily even when the keep is on alert. And while there are a lot of secret rooms and passages, there is a good explanation for them—places for the keep’s forces to hide out in if the keep is taken by enemy forces.

Even the dungeon of the ancient wizard’s tower beneath the keep is only as large as it needs to be. Here the encounters feel a bit more random (mainly because, in a sense, they are random, as the malfunctioning arcane engines here occasionally transport beings from other worlds here), but there are few enough of them that the adventure never starts to feel like a slog of yet one more monster after another. After a reasonable amount of resistance, the PCs can get to their destination and face of with Elessia, who is the primary villain of the adventure.

The adventure’s NPCs are also fully detailed with clear motivations and goals. Vos is a man obsessed with uncovering the secret of Fangwood Keep, which he first learnt of ten years ago while stationed there. His obsession led him to lie to his own soldiers when he led them here and then to betray them when they started to realize what was going on and rebel (which is why Elessia hired the hobgoblins). Elessia is not quite as well detailed, being more of a generic villain out entirely for herself and willing to betray even Vos. However, her motivations are still quite clear and there’s enough detail for GMs to make her into a compelling and memorable villain.

Even the hobgoblins are clearly detailed. It would be easy for the adventure to just make them generic monstrous troops, devoid of personality, and just there for the PCs to kill. Yet there are distinct personalities amongst the hobgoblins—particularly their leader, Fethi Ken-Shakkas and the bugbear Tralg (not strictly a hobgoblin, but still part of the hobgoblin group)--and the hobgoblins have their own reasons and motivations for being there. I also like that the hobgoblins are getting bored of their assignment (too much standing around in one place) and so it’s possible for the PCs to bribe or intimidate them into leaving. It’s also nice to see hobgoblins used as antagonists. Goblins get a lot of exposure in Pathfinder products, but the other goblinoid races, like the militaristic hobgoblins, have had very little so far.

If I have any criticism about Fangwood Keep, it would be that there’s not a lot of opportunity for the PCs to learn about Tessarael, the evil elven wizard who built the original tower the keep is built over. There’s a rich history to both the character and the location, but the PCs are only likely to learn just a small amount of it. This is a fairly minor criticism, however. It’s not at all uncommon for PCs to go through an adventure and not learn everything there is to know about the villains’ motivations. The fact that the history is there allows gamemasters to deliver a more believable and engaging experience.

Overall, Fangwood Keep is a very good adventure. It’s not particularly original. There are no world-shattering or awe-inspiring events. Yet its small-scale simplicity allows for a fun and engaging adventure, one that will be memorable for all involved.
Posted by Michael Ray Johnson at 22:15